Nigeria, five other African countries to begin production of Covid vaccines -WHO 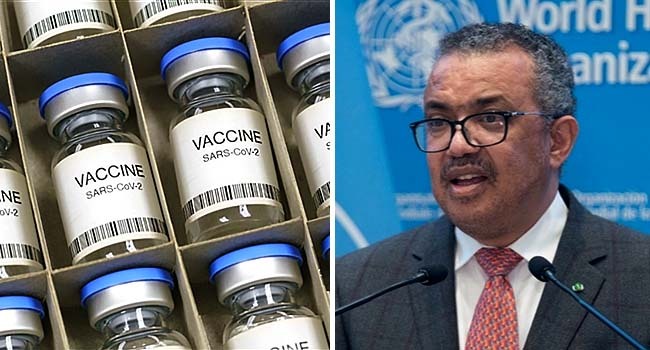 Nigeria and five other African countries have been chosen to begin production of COVID-19 vaccines, with the continent having had limited access to jabs.

“Today I’m delighted to announce the first six African countries that will receive technology from the hub to produce their own mRNA vaccines: Egypt, Kenya Nigeria, Senegal South Africa, and Tunisia,” Director-General of the World Health Organisation, Tedros Ghebreyesus, announced on Friday.

According to the WHO, they were selected as the first recipients of technology from the organisation’s global mRNA vaccine hub, in a push to ensure the African continent can make its own jabs to fight COVID and other diseases.

“I was honoured to visit the Hub last week. And it’s already producing results, with Afrigen’s announcement that it has produced its own mRNA vaccine, based on publicly available information about the composition of an existing vaccine,” Ghebreyesus said.

“We expect clinical trials to start in the 4th quarter of this year, with approval expected in 2024. We expect the benefits of this initiative will extend far beyond #COVID19, by creating a platform for vaccines against other diseases including malaria and tuberculosis.

“WHO will work with the companies and the government in each country to develop a roadmap for training and production, based on their needs and capacities.

“Thank you all, and we look forward to working with all of you to make this project a success, for the healthier, safer and fairer Africa”.

According to the WHO boss, no other event like the Covid-19 pandemic has shown that reliance on a few companies to supply global public goods is limiting, and dangerous.

He, therefore, stressed that the best way to address health emergencies and reach universal health coverage is to significantly increase the capacity of all regions to manufacture the health products they need.

Tedros has continually called for equitable access to vaccines in order to beat the pandemic, and rails against the way wealthy nations have hogged doses, leaving Africa lagging behind other continents in the global vaccination effort.

A ceremony marking the mRNA tech transfer announcement was held Friday in Brussels at the summit between the European Union and the African Union.

European Commission chief Ursula von der Leyen said: “We have been talking a lot about producing mRNA vaccines in Africa. But this goes even beyond. This is mRNA technology designed in Africa, led by Africa and owned by Africa.”

Currently, only one per cent of the vaccines used in Africa are produced on the continent of some 1.3 billion people.

The WHO set up a global mRNA technology transfer hub in South Africa last year to support manufacturers in low- and middle-income countries to produce their own vaccines.

The global hub’s role is to ensure that manufacturers in those nations have the know-how to make mRNA vaccines at scale and according to international standards.

As used in the Pfizer/BioNTech and Moderna Covid-19 vaccines, mRNA technology provokes an immune response by delivering genetic molecules containing the code for key parts of a pathogen into human cells.

Primarily set up to address the Covid-19 pandemic, the global hub has the potential to expand manufacturing capacity for other vaccines and products, such as insulin to treat diabetes, cancer medicines and, potentially, vaccines for diseases such as malaria, tuberculosis and HIV.

The scheme’s ultimate goal is to spread capacity for national and regional production to all health technologies.

The WHO said it would work with the first six countries chosen to develop a roadmap of training and support so they can start producing vaccines as soon as possible.

Training will begin in March.

The South African hub is already producing mRNA vaccines at laboratory scale and is currently scaling up towards commercial scale.

South African President Cyril Ramaphosa said Friday’s announcement “means mutual respect, mutual recognition of what we can all bring to the party, investment in our economies, infrastructure investment and, in many ways, giving back to the continent”.

French President Emmanuel Macron said supporting African health sovereignty was one of the key goals of starting up local production, “to empower regions and countries to fend for themselves, during crises, and in peace time”.

More than 10.4 billion Covid-19 vaccine doses have been administered around the world, with nearly 62 percent of the global population having received at least one shot.

However, just 11.3 per cent of Africans had been fully immunised by the start of February.

In Nigeria, many are yet to be vaccinated despite efforts by authorities to make citizens get the jab.

On Thursday, the country recorded 45 new cases of the virus, bringing its total number of confirmed cases to 254,182.

230,530 cases are, however, said to have recovered, while 3,141 deaths have been recorded in 36 states and the Federal Capital Territory.

Across the world, the vaccine continues to rage on.

Here are some of the latest developments on the impact of the virus:

Canadian police mass in the capital, readying to clear a trucker-led anti-Covid curb protest that has choked Ottawa’s streets and provoked the government to call on rarely-used emergency powers.

The world is becoming “better prepared” to deal with future variants of the virus, the CEO and co-founder of German vaccine-maker BioNTech tells AFP, as the company works on an Omicron-specific shot.

Japan will ease its strict virus border rules to allow students and businesspeople into the country from March, but tourists will still be barred.

Portugal to lift most Covid rules

Portugal will no longer require people to present a health pass when going to restaurants and hotels, the government says, without providing a fixed date. Proof of vaccination is still necessary to enter the country.

A South Africa regulator says it has approved the use of Merck’s Covid-19 pill for high-risk adults.

US jabs for Egypt, Nigeria

Tennis world number one Novak Djokovic prepares for his comeback in Dubai, after a coronavirus vaccine row kept the Serb from defending his Australian Open title.

Australian tennis player Alex de Minaur hits back at allegations he is being investigated over the purchase of false Covid passes, insisting: “I have a completely valid, accurate and true vaccination record.”

Coronavirus has killed at least 5,848,104 people since the outbreak emerged in China in December 2019, according to an AFP tally compiled from official sources Thursday.

Taking into account excess mortality linked to Covid-19, the WHO estimates the true death toll could be two to three times higher