PDP On A Mission To Rescue Democracy In Nigeria, says Sen.Anyim Pius- By Reginald Okoro 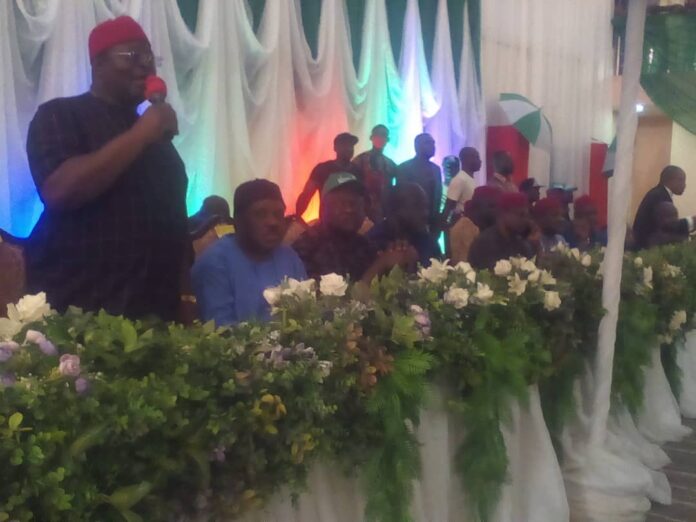 Sen. Anyim Pius Anyim on Tuesday in Abakaliki said that the People’s Democratic Party (PDP) was on a mission to rescue Nigeria’s democracy from imminent collapse. Anyim former President of the Senate and Secretary to the Government of the Federation (SGF) stated this while addressing members at an enlarged meeting of the party held at Salt Lake hotel in Abakaliki. The PDP chieftain who is a frontline presidential aspirant in the 2023 presidential election expressed optimism that the party would address the social, political, economic and security challenges bedevilling the nation. He charged party faithful to remain steadfast and committed in their support to the party adding that there was light at the end of the tunnel. “PDP is on course, we are on a mission to rescue our threatened democracy and by the grace of God we shall achieve victory in 2023,” Anyim said. The former SGF predicted that more lawmakers of the All Progresives Congress (AP) in the Ebonyi State House of Assemby would join PDP by March.”I want to assure you that Ebonyi remains a PDP state. By March, our party will welcome more APC lawmakers from the state House of Assemby. “They are our own and we should be ready to welcome them back; I can assure you that we will soon takeover the leadership of the current House of Assemby,” he addedAnyim said that without the nine PDP lawmakers that the Assemby would not get 2/3 majority needed to do anything in the House. He accused 15 APC lawmakers of desperation in a bid to maintain control of the House.The 15 APC Lawmakers had on Monday purportedly elected Mr Kingsley Ikoro representing Afikpo North-West constituency as new deputy Speaker to replace Mr Obasi Odefa. The election of Ikoro as new deputy speaker came after a letter allegedly written by the embattled lawmaker revealed that he has resigned as member of the House.The letter was read on the floor of the House by the Speaker, Chief Francis Nwifuru, which led to the declaration of Odefa’s seat vacant by the Speaker.Anyim said : “Some people desperately are forging signatures, some people desperately are concocting members.” But, the fact cannot lie. Our House of Assembly members are intact, nine of them are here as you can see in this meeting.“In this family today, we have a big fish, a member of APC BoT, a leader, a critical stakeholder in Ebonyi, the pride of Ebonyi government, he is here with us. “It is my singular honour on behalf of this caucus to present to you, Chief Austin Edeze; the empire is crumbling, it has started. It will continue to crumble,” he said. On his part, the Senator representing Ebonyi North and former governor of the state, Dr Sam Egwu urged PDP members to remain steadfast and committed to the programmes and agenda of the party. Meanwhile, Chief Tochukwu Okorie, PDP state chairman while welcoming leaders and members of the party to the meeting stressed that PDP was set to reclaim the Government House. He said that the purported resignation of Odefa only existed in the imagination of purveyors of the falsehood saying that the embattled lawmaker remained the authentic deputy speaker of the state House of Assemby. “You cannot establish something on nothing. I’m happy to announce that the attempted coup d’ etat which sought to forcefully remove the deputy speaker, Obasi Odefa has failed. “Let me therefore state categorically that Odefa remains the substantive and undisputed deputy speaker of the Ebonyi State House of Assemby,” Okorie said.