ENUGU 2023: EKWEREMADU AND THE COLOURS OF HYPOCRISY – BY EZENWA OKENWA 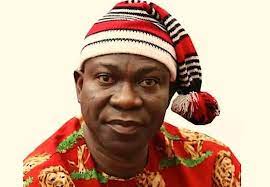 Senator Ike Ekweremadu: Speaks from two sides of his mouth?

A few months after the 2015 general elections, the Peoples’ Democratic Party (PDP), set up a committee to review the circumstances that led to the sobering defeat it suffered, and to recommend steps that would help the party to avert a repeat scenario in future elections.

That post-election committee was chaired by Ike Ekweremadu, a Deputy Senate President and the Senator representing Enugu West, and the findings regarding the party’s loss was unequivocal: the major reason was its non-adherence to the principle of zoning.

Speaking after the submission of his committee’s report, he was even more emphatic. “Since the last president of PDP extraction came from the southern part of Nigeria, it is recommended that PDP’s presidential candidate in the 2019 general election should come from the northern part of the country in accordance with the popular views expressed in the submissions to the committee,” he said.

To mitigate injustice and feelings of marginalization in the PDP, the committee also recommended that “the zoning principle, which has been the strength of the party, should be strictly adhered to as a matter of urgency at all levels” (Vanguard, October 1, 2015)!

Interestingly, Ekweremadu, who ought to know better, has consistently sought to revile us and drag the peace that has reigned in the state to the mud of public obloquy. Like the Janus in Greek mythology, he wears a dual face in opposite directions and speaks from the two sides of his mouth.

How then could a principle idealized as “the strength of the (PDP)” be considered an anathema just a few years later? That is a question Senator Ekweremadu would gladly avoid. But the question remains nonetheless and follows him like an albatross as he embarks on his insidious bid for the Enugu State governorship in 2023.

This is so especially given that he was the author of those words quoted earlier. Unknown to him, there is indeed no verdict more scathing than the words of a man standing in witness against him.

Nowhere else has the benefits of zoning been more pronounced than in Enugu State, where adherence to rotational power-sharing has helped to foster an agreeable political climate that gives every section a sense of belonging.

Ekweremadu is himself a product of zoning. On the basis of zoning he was hauled from an obscure tiny village of no more than 500 souls to represent the very sophisticated senatorial zone of the state.

So, in drafting the recommendations on zoning, Ekweremadu’s committee appears to have drawn inspiration from the state. Since 1999, Ekweremadu has, solely based on zoning, held a varying degree of political office, from Chief of Staff to a governor to Secretary to the State Government and a senator!

As such elite political offices go, not least in a developing democracy like Nigeria’s, occupants often tend to be carried away by the associated fripperies to the extent that life outside the bubble becomes too hard to contemplate.

It may seem like a naturally-imbibed tendency, but it is dangerous if not tempered by the time-honored lesson that power is transient, and the knowledge that public service is also nurtured by the experience gleaned in followership, not by a perpetual sense of entitlement.

In the insightful nuggets of leadership by the Russian playwright Anton Chekhov “He who doesn’t know how to be a servant should never be allowed to be a master; the interests of public life are alien to anyone who is unable to enjoy others’ successes, and such a person should never be entrusted with public affairs”!

Those who have closely observed Ekweremadu’s nuances would readily have noted this streak of a perpetual sense of entitlement. We saw displayed when the former vice president, Alhaji Atiku Abubakar, the PDP presidential candidate in the 2019 general election, chose Mr. Peter Obi as his running mate.

The feeling that he should have been the rightful pick and the petulant indifference it bred remained strong throughout that campaign period, even though he would later make what amounted to no more than some can’t-help-it appearances. Indeed, there was also the case of his ill-advised contest for the post of deputy senate president in the 9th Senate despite his party being clearly in the minority, a desperate move that further underlined his lust for power.

One of the arguments often put up to oppose zoning the governor’s seat is that it creates a provincial mindset in politicians who emerge through such arrangement, and that it tends to make them feel more obligated towards their immediate zone than seeing the entire state as their constituency.

Perhaps this might be considered a plausible argument if the man for whose benefit that argument was advanced had extended his famed benevolence to the entire Enugu West Senatorial District that he represents, and not limited only to his Aninri Local Government Area, and largely his tiny village Mpu.

The Zonal Intervention Projects, otherwise known as constituency projects, was an initiative launched by the Olusegun Obasanjo administration to spur speedy growth at the grassroots. The assumption was that being facilitated by legislators, the projects so chosen, and included in the Appropriation Act, will reflect the real developmental needs of communities across the country.

But in the roughly 19 years he has been in the senate – 12 of those years as Deputy Senate President, Ekweremadu’s imprint is barely seen anywhere else in his Senatorial zone.

Similarly, some have even ascribed competence to Ekweremadu as a selling point in his gambit. But I am at loss at this gratuitous elevation. For a man who occupied the elevated position of a deputy senate president for a record 12 unbroken years, most of which was under a PDP government, and the Enugu Port Harcourt and Enugu Onitsha highways remain impassable, it beggars reasoning to see any validity in such ascription.

He would rather sheepishly facilitate a road contract from the highway to his tiny Mpu village as if the whole of South East had by that elevated position not become his larger constituency. Those who know the nuances of budgeting at the National Assembly would appreciate the preeminent position Ekweremadu held for at least 8 good years as Deputy Senate President under a PDP government.

At one point, he even had the duo of Senator Ayogu Eze and Hon Ogbuefi Ozomgbachi as the Chairmen of the Committees on Works at the Senate and House of Representatives respectively. That these crucial roads, significant portions of which run through his senatorial district remained unattended to speak unequivocally loud about his so-called competence.

So, barring the reconstruction currently being carried out by the President Muhammadu Buhari government, Ekweremadu might just have occupied such an exalted seat without facilitating the fixing of these all-important South-east corridors that adorn his immediate constituency.

What then qualifies him for the post of governor, which he so desperately seeks at the risk of upending an established rotational order?

Leadership is about legacy. A leader who apparently has little qualms about the political and cultural division that his ambition will foster should never be trusted.

By openly disavowing an idea he had passionately canvassed, and which has earned Enugu State much respect as a stable political entity, Ekweremadu has done incalculable harm to the immense regard he has earned over the years as a respected voice of equity and justice.

No amount of sophistry can whitewash the self-seeking quest that Ekweremadu’s governorship ambition represents. Having pledged in 2019 amid rising opposition to his fifth run for the senate that the current term would be his last, the likelihood of a life away from the corridors of power is apparently leaving Ekweremadu downcast.

Again, the words of Chekhov ring out: “He who doesn’t know how to be a servant should never be allowed to be a master.”

Enugu without doubt needs a shift from the present drudgery where we literally confuse political position as synonymous with leadership credential.

While it is possible for the former to crystalize to the later, the Ekweremadu we know has not earned it by any stretch of imagination. Whether we like it or not, Chukwuma Soludio’s emergence as governor in Anambra represents a transitional process in leadership in the South East and we must rise up to it.

Beyond the flattery and circus of politics, we need a transition from the old order to an imaginative leadership paradigm where selection is not based on the likelihood of the would-be governor’s capacity to be eternally obsequious to his godfather or simply his ability to pay his way through.

There are so many sons and daughters of Enugu who can build on the solid foundations already laid by Governor Ifeanyi Ugwuanyi and the duty is cast on him to search diligently for that person that has both institutional experience and exposure to match the moment.

Yet, I can hardly blame Ekweremadu if he believes the principle is after all not sacrosanct. Having occupied the Senatorial seat of his zone for a wholesome 20 years, it is perhaps natural to feel that zoning had ceased to exist.

But the tragedy of humans who have enjoyed a roller coaster power fantasy is that they often fail to recognize or deliberately ignore endgame signs and therefore fail to prepare for the inevitable.

No festival is as perennial as the river Niger, and no masquerade is celebrated forever. Sagacity is being able to read the tea leaves and draw the necessary lines between venal brinkmanship and inevitable realities.

In the political circle, the moment a certain masquerade begins to see himself as a god, some ethereal forces often emerge to unmask and reduce it lower than a human being. And the day a man begins to mock himself, others will join.

The revelations in the petitions against him by the former Chief Judge of Enugu State, the late Hon. Justice Innocent Umezurike, and which has attracted the attention of the Economic and financial Crimes Commission (EFCC); coupled with the recent revelations of his alleged real estate holdings in foreign countries, ostensibly make him so desperate about the office of governor of Enugu State come 2023!

He possibly hopes that by clinching the coveted seat, and clad with all the perks associated with the office, especially the immunity from prosecution facility, he would be able to buy some time and possibly dissipate every evidence against him over these weighty allegations.

Thus, his desperate quest for the position is matched only by his infinite preparedness to catch at any straw and employ anybody as a sacrificial lamb in the process. But this lust is inevitably his nemesis!

And to his supporters who chorus a repudiation of the zoning principle and spread the lie that the cyclical order of rotating the governor’s seat in Enugu State ceases after the first cycle, I hope these words by the Danish philosopher, Soren Kierkegaard, come as a chastening: “There are two ways to be fooled. One is to believe what isn’t true; the other is to refuse to believe what is true.”