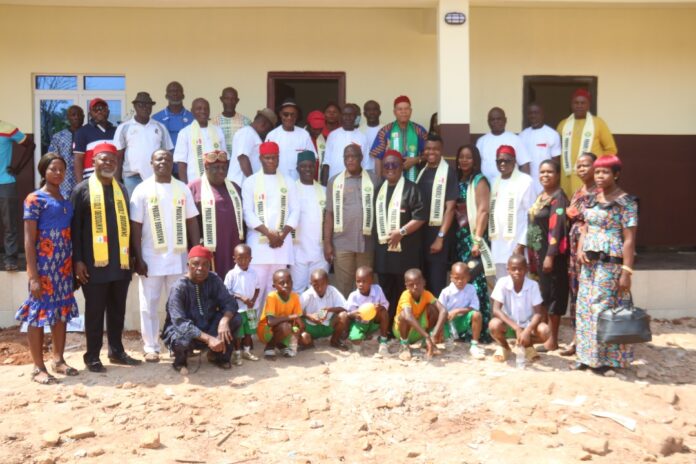 Giving back to the society – putting smiles on the faces of  the common people as well as the needy, constitute an enduring legacy any God- fearing and humane philanthropist would want to leave behind at the end of his sojourn on this earth.

It’s an attribute that speaks good for itself in the presence and absence of the donors which in turn increases their spiritual and physical blessings.

Addressing newsmen at the sideline of the commissioning of the project, Rt. Hon. Innocent Arthor Egwim, member representing Ideato North State Constituency in the Imo State House of Assembly, expressed joy over being invited to commission projects built by individuals who hail from his constituency.

”I feel honoured and privileged because it’s uncommon that  an individual will build a place and invite me to come and commission it.

“That shows that my people love me. I commissioned one at Osina town yesterday. In fact in my constituency a lot of individuals have invited me to come and commission projecst they built for their communities.

“These projects built by individuals are gestures worthy to be  emulated by other wealthy individuals in our various communities,” he said.

The two time House of Assembly member announced the donation of 20 sets of computer to each of the two schools, saying that it’s part of his contributions towards the growth and development of education in the area.

”I have pledged to donate 20 Computer sets for each of the schools, for the pupils in the two classroom blocks I have commissioned. This is what I can donate for them and fulfill it within the possible time” he reiterated.

He frowned at the neglect and abandonment of projects at Obodoukwu by the state government. He poured encomium on the donors for their generosity and love to mankind.

”Am indeed very happy that these projects that were neglected by the government for many years now have been executed through the philanthropic gestures of Obodoukwu sons, Chief Obidi Umeh Esqr, Ugonnia Obodoukwu. and Chief Uche Umeayika Nwajiugonnaya Obodoukwu during my tenure.

“The magnificent school building projects lasted just for four months. This is a replica of the schools you find in advanced countries. We can’t thank them enough, but I know that God will continue to replenish their pockets in million folds, he said.

High Chief Obidi Umeh Esq (Ugonnia Obodoukwu), said the dilapidated state of the school he attended many years ago called for his attention to change the face of the classroom blocks.

”This was where I attended my primary education more than fifty years ago; the school is still in the same colonial state when I attended the school. Before now the classroom blocks were in  a state of  dilapidation. Based on the pressure from my wife, we had to build it. I thank God we have to complete it within record period,” he told journalists.

The visibly elated High Chief expressed his enthusiasm in executing projects that touches the life of the common man in the society.

”I feel highly elated that we completed the project, you can see am here with my son for the commissioning. I pray to the Almighty that it will serve the purpose for which  it was  built.

“I have the penchant of executing projects in Obodoukwu, the people and the gods of the land will attest to it. In the next few months, I will commence another project, I won’t disclose now,” he affirmed.

The Chief Executive Officer, Uchemec Group of Companies, Chief Uche Umeayika, ”Nwajiugonnaya” Obodoukwu, who built the UBE school 2 Obodoukwu, said he derives special pleasure executing projects that touches the lives of the common people in the society, adding that those projects are the major legacies he wishes to be remembered for.

”Am very happy doing all these projects that will touch the lives of  the common people in the society. Tomorrow I shall be no more,  but these are legacies I will be remembered for.

I  am using my hard earned money for all these projects, am not in government, and I don’t intend to be. I was born and bred at Obodoukwu, it’s the love of God and Obodoukwu people that made me to build this edifice.

“ I have done four projects at Obodoukwu, by the special grace of God, the next project will be road construction before the end of 2022′,” he promised.

The beneficiary of the project Mrs. Chinyere Dim, the Acting Headmistress of UBE Modern Primary School Obodoukwu (former Central School 11 Obodoukwu), posited that  ”the school was an ancient building, constructed with mud sand.

The school was built in 1946. When its foundation  became very weak, the school authority cried to both the state government and the town union authority for help.

Mrs Dim disclosed that government officials were sent to the school to take inventory of work to be done, including taking pictures of the school, but regretted that nothing positive was done afterwards.

“But now  that succor has come from Nnajiugonaya, we are appealing to the government to come and equip the school library with textbooks and other necessary amenities for conducive learning condition of the the pupils,” she pleaded.

“We appreciate all Nwajiugonaya has done for mankind. If not  for his intervention through God we could have recorded a very huge hazard when the foundation of the classroom building was collapsing. Nwajiugonaya commenced the project in July 2021, and completed it within the scheduled time, and today 30th of December 2021, we’re witnessing the commissioning and handing over of the project to the school authority, and  we immensely appreciate his kind gesture,” Mrs. Dim concluded.