RUSSIA INVADES UKRAINE – DAY 2 – ALL YOU NEED TO KNOW 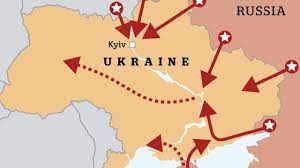 Several explosions are heard in the Ukrainian capital Kyiv

An overnight curfew was in place in Ukraine, and metro stations remained open to serve as bomb shelters.

Thousands of Ukrainians have left their homes to find safety in neighbouring countries – a figure the UN High Commissioner of Refugees estimates at more than 100,000.

Poland – which lies directly east of Ukraine – has also set up reception centres along its border in preparation for the influx of war refugees.

If you’re wondering where clashes are taking place between Ukrainian and Russian military forces, here is the latest:

Fighting has seemingly intensified in the capital city of Kyiv as Russian forces advance, with reports of several explosions, gunfire, and missile strikes being heard in or around the city early on Friday

A Ukrainian interior ministry official claimed that a Russian aircraft has been shot down over the Darnytskyi district of Kyiv, although these reports are unconfirmed

Fighting is also raging at an airfield on the outskirts of Kyiv, and it could become a springboard for the Russian army into Kyiv if its troops seize it

Following clashes, Russian forces have seized control of the former Chernobyl nuclear complex in northernmost Ukraine, close to the Belarusian border and just 93 kilometres from Kyiv. The US says Ukrainian soldiers are being held hostage there

Since the start of the invasion, Ukraine has been trying to fend off the Russian invasion from three separate fronts – the north, south and east of the country, where fighting has been among the fiercest

A sleepless night in Ukraine’s capital

One of the many tower blocks in the neighbourhood caught alight and windows were blown out. Working in the smoke and debris, firefighters managed to put out the flames as explosions continued to rock the city.

At least eight people have been injured in Pozniake. One resident vowed, “Putin, we want to see you slaughtered like an animal.”

Elsewhere the night sky was illuminated by other blasts. Sirens were still sounding as the overnight curfew lifted at 7:00 am local time. Kyiv hasn’t been a city waking up – because few have slept.

And the explosions keep coming.A round up of all the latest developments

It’s day two of Russia’s invasion of Ukraine – the first major ground war in Europe in decades. If you’re just joining us, here are the latest developments:

We’ve seen footage and images of explosions and damaged buildings in Kyiv, which is home to 2.8 million people. Residents woke to air-raid sirens and have been told to take shelter in bunkers.

Russia is intensifying its attack on the Ukrainian capital, after advances on Ukrainian cities in the east, north, and south. We’ve seen battles all over the country, with the fighting heaviest in the eastern breakaway regions and also in Kharkiv – the second-largest city.

Among them were 13 Ukrainian guards who died defending a tiny territory – Snake Island – in the Black Sea. Audio of their final, defiant words to a Russian warship has gone viral

One battle occurred at the Chernobyl nuclear site in the north, which fell to Russian forces. The US says Ukrainian soldiers are being held hostage there

French President Emmanuel Macron said he phoned Vladimir Putin asking him to end the attack, and the call was “frank, direct, quick”

But Mr Zelensky questioned the power of Western sanctions in his speech this morning saying, “like yesterday, the world’s most powerful forces are watching from afar.”

One story of Ukrainian soldiers stirring emotions right now is the story of the Snake Island battle – where 13 Ukrainian guards on a tiny island in the Black Sea refused to surrender to a Russian warship. They held their ground and were killed in a bombardment.

Audio of the guards’ defiant final words has gone viral on Twitter, TikTok and other social media.

The Russian ship tells the Ukrainians: “I suggest you surrender your weapons and capitulate, otherwise I will open fire, do you copy?”

The Ukrainian guards can then be heard saying “this is it”, before they respond with:

“On our island Zmiiny [Snake Island], defending it to the last, all the border guards died heroically. But did not give up,” he said.

All of them will be awarded the title of Hero of Ukraine posthumously. Eternal memory to those who gave their lives for Ukraine.”

We reported earlier that at least one set of apartments in the Ukrainian capital Kyiv was hit by a Russian strike in the early hours of Friday morning.

Here’s verified video of one of the damaged buildings.

The Kyiv mayor earlier said that at least three people were injured as a result of rocket strikes.

Volodymyr Zelensky has made yet another plea to Western allies to help Ukraine and stop Russia’s brutal assault.

“This morning we are defending our state alone. Like yesterday, the world’s most powerful forces are watching from afar,” Zelensky said in his address to the nation this morning.

“Was Russia convinced by yesterday’s sanctions? We hear in our sky and see on our earth that this was not enough.”BreakingZelensky confirms pre-dawn missile strikes

Zelensky said the strikes began at 4am on Friday local time.

He added that Russia’s strikes had targeted both military and civilian sites. Russia has previously said it’s not aiming strikes at civilians.

But as we reported earlier, the capital Kyiv has seen blasts this morning, including what appears to be a strike that hit a residential building.

BreakingUkraine’s leader: Russia will have to talk to us to end war

It’s 7.30am in Kyiv. Ukraine’s leader Volodymyr Zelensky is speaking again to his citizens in a video address. In both Ukrainian and Russian, he’s making appeals to Russia for a ceasefire.

“Russia will have to talk to us sooner or later about how to end hostilities and stop this invasion,” he said.

“The sooner the conversation begins, the smaller Russia’s losses will be.”

He added that until the attacks stop, “we will be defending our country until then”.

Just last night, he’d warned of the intensifying attack on the capital. He said he had no intention of leaving the capital and that he knew he was Russia’s number one target right now.

Meanwhile, there are multiple reports of more explosions in and around Ukraine’s capital.

The BBC’s Paul Adams says he has heard air sirens and at least one blast.

Ukraine’s military has published footage of what it says is a street gunbattle between Ukrainian defenders in the north-eastern city of Sumy and Russian attackers.

Sumy – with the population of more than 260,000 people – is a regional capital that lies less than 30km (19 miles) from the Russian border.

The head of the local administration, Dmytro Zhyvytsky, said a large Russian military convoy was heading west past Sumy towards the capital Kyiv.

He also said that the nearby town of Konotop was now encircled.

The service says there are casualties and injured among the border guards from the Prymors’ky Pasad unit.

US Secretary of State Antony Blinken says he is “convinced” that Russian president Vladimir Putin will try to overthrow the Ukrainian government.

In an interview with US broadcaster ABC, Mr Blinken said it was “part of the Russian plan” to assault the capital Kyiv and other major cities in Ukraine, along with launching a multi-pronged attack on the country from the north, east and south borders.

Mr Blinken said a Russian attack beyond Ukraine was “a possibility”, but reiterated the US’ commitment towards defending its Nato allies, warning that “an attack on one member of Nato is an attack on all members of Nato”.

“The President’s been very clear that we will defend every inch of Nato territory. I think that’s the most powerful deterrent against President Putin going beyond Ukraine,” he said.

Mr Blinken also reiterated US President Joe Biden’s position that the possibility of expanding existing US sanctions to target Mr Putin directly was still “on the table”, if the situation were to escalate.

It’s just turned 06:00 in Kyiv on day two of Russia’s invasion, which represents the first major ground war in Europe in decades.

If you’re just joining us, here’s the newest developments:

We’ve been hearing reports of explosions in the Ukrainian capital Kyiv on Friday morning.

There are more unconfirmed reports coming in that the city’s air defence stopped an air raid by intercepting a number of missiles and downing an enemy aircraft.

An official with the Ukranian interior ministry said an aircraft had crashed in the Darnytskyi district of Kyiv.

Meanwhile local reports say a nine-storey residential building is on fire in Kyiv.

Kyiv Mayor Vitali Klitschko has tweeted saying at least three people were injured, one of whom was in critical condition, “as a result of a rocket fragmentation”. He added that the building was on fire and that it was under “threat of destruction”.

Macron has ‘frank’ call with Putin

He says the Ukrainian leader asked him to contact Putin because Zelensky’s calls were not getting through.

Macron says he phoned Putin to ask him to stop military operations and the call was “frank, direct, quick”.

“It was also to ask him to discuss with President Zelensky, who had requested that, because he could not reach him,” Macron told reporters after an EU summit in Brussels.

The sanctions will target areas including the financial sector, energy, transport, and visas for the Russian elite, she said after a meeting that ended in the early hours on Friday in Brussels.

Von der Leyen said the adopted measures would make it impossible for Russia to buy technology to upgrade its oil refineries, or spare parts for aircraft.

“The package of massive and targeted sanctions approved tonight shows how united the EU is,” she tweeted.

French President Emmanuel Macron, said €300m ($336m; £251m) of aid would be offered to Ukraine, as well as military equipment.

The sanctions do not cover the import of Russian gas into the EU. Questioned on this, Von der Leyen said they were urgently looking at how to wean Europe off its dependence on Russian energy.

An official with the Ukrainian interior ministry says a Russian aircraft has been shot down over the Darnytskyi district of Kyiv.

Anton Herashchenko says the jet crashed near a house at 7a Koshytsia Street.

The unconfirmed claim follows reports of a couple of explosions earlier in the Ukrainian capital.

Similar sounds were heard on Thursday when, according to Ukrainian officials, a military base in Brovary, a town near Kyiv, was hit by Russian cruise missiles, leaving six people dead.

Reports are now coming in of several explosions in Ukraine’s capital Kyiv.