ISSUES: Nigerian women insist they can do better than sing, dance at conventions, campaigns – By Ngozi Agueze 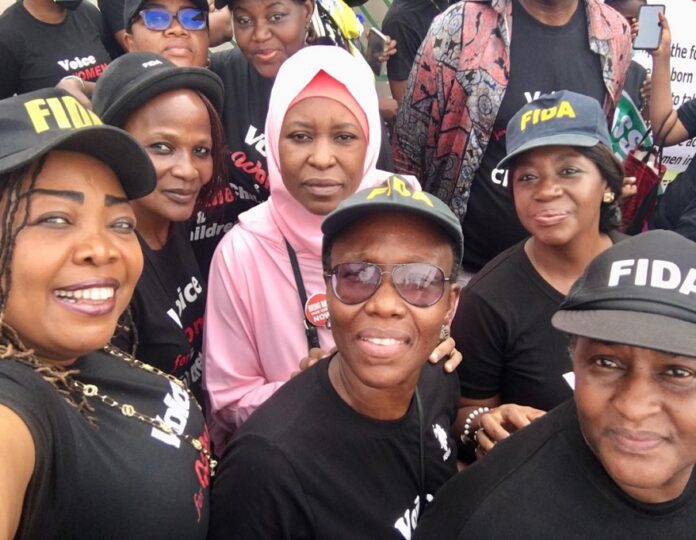 “Why should Nigerian women be considered relevant only when it is time to sing and dance at campaigns or cast votes during elections? This however is a wake-up call for Nigerian women to strategize and take maximum advantage of their population and change the narrative.” – PROWIN

The presence of Nigerian women at the gate of the National Assembly and on the streets across the country as International Women’s Day is marked all over the world is a clear response to the legislators’ attitude towards, six key bills directed at ameliorating biases against them at the on-going constitution amendment process.

Agbaje and FIDA like other women groups insist on more “opportunities for women’s inclusion, in order to bring better attention to germaine issues that uniquely affect them.” By doing so she observed, there will be a change in negative attitudes towards gender-based issues.

This is even as the Professional Women in Nigeria (PROWIN) described the legislators’ attitude as a wake-up call for Nigerian women to take advantage of their population and change the narrative.

Professional Women in Nigeria (PROWIN) is greatly saddened by the Nigerian National Assembly’s rejection of six key bills directed at ameliorating biases against women at the ongoing constitution amendment process.

It is disheartening that on the first day of International Women’s Month, March 1, 2022, Nigeria’s 9th National Assembly comprising of 94.6% men voted against constitutional amendments that would have greatly impacted Nigerian women. This is a huge blow that has painfully set Nigeria several steps backward.

By declining their assent to-

2. Women’s ability to take indigeneship of their husband

The calibre of legislators at the national assembly is apparent and this will only heighten the struggle for actual inclusion of women in a society that has proved to be unrelentingly patriarchal. The theme of this year’s international women’s day celebration is apt and timely for women, especially in Nigeria.

This is a wake-up call for women to take the bull by the horns as we all know that power will not be given to us on a platter of gold. Women must not relent but remain poised to ensure that the female gender is recognised and treated with as much dignity as the opposite gender.

Section 17(1) of the 1999 Constitution as amended provides that: “The State social order is founded on ideals of Freedom, Equality, and Justice. Subsection (2) states that: “In furtherance of the social order- (a) every citizen shall have equality of rights, obligations, and opportunities before the law…”

Again, the Fundamental Human Rights of 1948 made it clear that everyone is equal and the UNSCR 1325 states that women should be included in governance and decision-making processes in all member countries.

One day is not enough to celebrate women… Today and always, I celebrate with you! Afam Okeke, Chair, NBA Abuja (Untity Bar) Sports Committee

That is why there are 5 pillars which are Participation, Protection, Promotion, and Prosecution. All these points to the fact that No One should be left behind in the governance across all levels, and facets of life in line with the Sustainable Development Goals slogan.

It is disheartening for instance that a federal legislator sees women’s rights to vote as an achievement while advising women to patiently build on the supposed gain. This disposition is rather unfortunate in the 21st century where nations are accelerating and consolidating on the gains of democracy in terms of inclusivity, sustainable growth, and development.

The Republic of Namibia for instance has adopted a 50 percent gender quota which shall apply to all elective and appointive offices. The ruling South West Africa People’s Organisation (SWAPO) has a 50% one woman, one man (or “zebra”) quota. Today 46 of 104 (44%) seats in their National Assembly are held by women. Rwanda on its part has 65% of Women in leadership and Nigeria with top-notch female professionals is endorsing 20%? This is unacceptable.

Why should Nigerian women be considered relevant only when it is time to sing and dance at campaigns or cast votes during elections? This however is a wake-up call for Nigerian women to strategize and take maximum advantage of their population and change the narrative.

We maintain that equal participation of women and their rights to access positions of political leadership and decision-making at all levels is fundamental for achieving much-needed economic growth and a well-functioning democracy.

Nigerian women should be able to freely exercise their right to participate politically as voters, political party members, candidates, elected representatives, and appointed officials. For these reasons, we call on the National Assembly to take measures to remedy the current situation.

To the Nigerian women-

Finally, we join voices with other women’s groups in endorsing the historic 1 MILLION WOMEN MARCH! across the country!