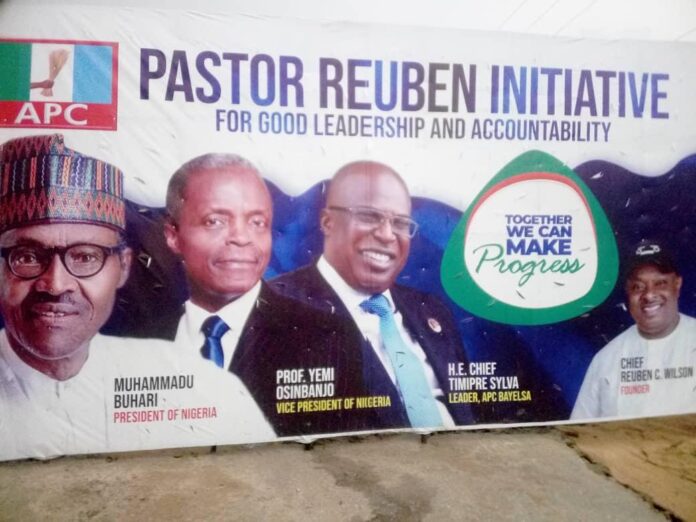 A chieftain of All Progressives Congress (APC) in Bayelsa State Chief Alamene Williams, on Tuesday called for reconciliation and unity among party leaders to ensure victory for the party in the 2023 general elections

He urged the advisory committee members of Pastor Reuben Initiative For Leadership and Accountability (PRIFGLA), to lead the process of unifying party faithful to their fold.

He explained that PRIFGLA is a support group within the APC poised to motivate and encourage supporters to overcome the disappointment suffered by the party following the Supreme Court judgement that sacked its governor-elect on February 13, 2020.

Williams, a former Commissioner for Environment in Bayelsa spoke while inaugurating members of the PRIFGLA Advisory Committee in the group’s secretariat in Yenagoa.

He observed that the advisory committee comprises elders, eminent men and women chosen from the eight LGAs with pedigree, integrity who have paid their dues politically.

Williams said the main aim of the committee is to unite, guide and advise the group when necessary.

He pointed out that the task before advisory committee members is enormous and urged them to work tirelessly to reclaim APC’s lost mandate in Bayelsa.

Williams emphasised the need to unite all aggrieved leaders at the top, those at the middle and members at the bottom in spite of their differences.

According to him, it is only by being united that APC can reclaim its lost mandate.

In his acceptance speech, the chairman of the advisory committee, Hon. Stephen Ogullah, thanked the initiator of the group, Pastor Reuben Wilson for bringing APC members together as one big family.

Ogullah said it was heartbreaking and traumatising that after the candidate of the APC, Chief David Lyon won the Bayelsa Governorship election by landslide, the Supreme Court decision cut short the joy of wining.

He appealed for unity amongst leaders to make the party succeed in subsequent election, and enjoined those aggrieved by developments to sheathe their sword work together to regain lost grounds by leveraging on the goodwill of the party.

He promised on behalf of the members to carry out the assigned task with all sense of duty and commitment to move the APC forward.

While inaugurating the Senatorial, Local Government and Ward Coordinators, the initiator of the group, Pastor Reuben Wilson, said the mission of the PRIFGLA is to ensure APC retains power at the center and to take over Bayelsa state.

Wilson enjoined leadership of the group to move from house to house, community to community, ward to ward to galvanise is support for the APC to win the forthcoming elections at all levels.

He re-emphasized the need for unity amongst party members, adding that without unity no party can succeed.

The Director General of PRIFGLA, Dr. Solomon David reiterated the commitment of the group to ensure that the APC reclaim its lost mandate