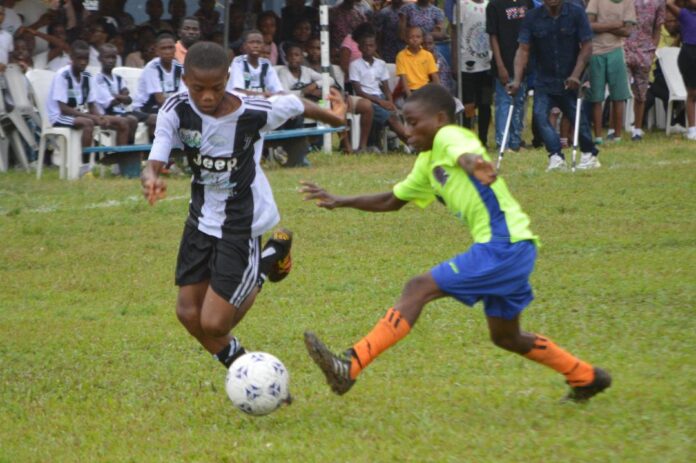 Speaking on the sidelines of the event, the Special Guest of Honour, and Permanent Secretary Rivers State Ministry of Sports, Sir, Honour Sirawoo, said his ministry will encourage talent hunt such as the Radio Nigeria Kids football competition where young football stars will blend for National Sports Festival team.

”The Ministry of Sports need them for the National Sports Festival; if these stars are discovered in Rivers state, they belong to us. That is why I even came here to see how strong the whole exercise is. And for what I have seen, it means we will encourage them, and also encourage others, so that we can discover more talents.”

Sir Sirawoo praised the management of Federal Radio Corporation South-South zone for moving above sports broadcasting they are known for, to put food on the tables of families, and discover talents for Nigeria National teams.

”The Radio Nigeria Kids football competition is actually a great venture. Radio Nigeria is known for sports broadcasting, from what we are seeing here, they have grown beyond that.

“Even if it’s to be seen as their social corporate responsible, they are now trying to put food on the tables of families; they are trying to discover talents for our national teams, they are trying to increase our tourism potentials as they engage these children at their young ages.

“We saw at the field here a lot of talents, if we start now to polish them, they will be great stars. Someone like Messi was picked at a very young age like this.”

Sir, Honour Sirawoo, who is also President, Sports Writers’ Association of Nigeria (SWAN), admonished parents and school administrators to expose their wards to exhibit their God given potentials, stressing that sport has gone beyond recreation.

”Sport has gone beyond recreation.  It’s now a money-spinning venture that doesn’t need so much education. If a family cannot afford to train their children in the school, and discovers the talent they have particularly in sports, you have the opportunity to make money more than a Professor in the university. You know Christiano Ronado, tell me any President in this country that is wealthier than him. We need to let our Parents to know this fact. School administrators and families should allow their wards to exhibit their God given talents”

Speaking earlier, the Zonal Director, Federal Radio Corporation of Nigeria South-South, Lucky Obarein, expressed delight that Radio Nigeria is using the Kids football competition to demonstrate their slogan; (uplifting the people and uniting the nation); seeing the gesture as their corporate social responsibility to the society they operate from.

”Radio Nigeria uplifting the people and uniting the nation, we are using this competition to demonstrate that slogan. We believe when invested in the young one around us here we are impacting on the nation. I have been told that some kids that participate in the last edition are already on their way to Rivers United FC.

“And this gives us joy that they are making waves. We are organizing this because we saw it as part of our corporate social responsibility –   We want to give back to society that we operate from. And when you see the joy in the faces of these young ones, you feel happy yourself, because you notice you are making a contribution”

He praised the Local Organizing Committee, led by Dr. Kola Oradikpe, for its untiring efforts at sourcing funds for the competition, and promised that the competition would be held annually.

“We are sustaining the competition. The event for the 2023 edition starts tomorrow. We intend to increase the number of participating schools in the next edition,” he said.

Both Favour Joseph Ofoma, coach of the winning team – Great Calvary School, and the coach of the tournament, jointly expressed gratitude to Radio Nigeria for organizing the competition.

The Captain of the winning team Stephen Eugene, said the team’s victory was achieved through hard work and the grace of God.

Nicholas Kuruye, captain of Cedar Mount International School team, expressed displeasure over the team’s loss, and promised they will be better and stronger in the next edition.

The final competition started with an early goal scored by Cedar Mount International School, prompting spectators to expect more goals from the team.

But the Great Calvary School players, were not deterred by this early goal, and so went ahead to score three goals that changed the score line at 3-1 at full time.