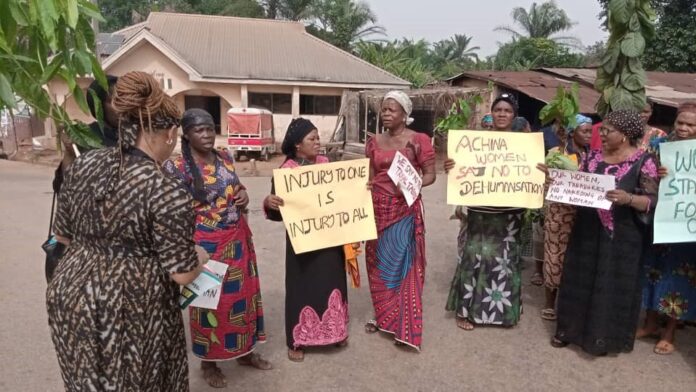 The League of Achina Women Professionals (LAW-P), has expressed deep sadness over what it described as the barbaric and inhuman treatment meted out on an Aguleri woman in Anambra State, whose husband allegedly died while both of them were copulating.

The group in a statement signed by its President, Chinwe Ezenwa-Mbah, Esq., called on rights groups, men and women, community leaders, and governments at all levels to jointly protect the woman, the girl-child and the widow.

The statement made available to Summit News further stated that “It is particularly disheartening that this is happening at a time when the protection of the rights of women, girls and widows have taken center stage globally.

The statement reads: “…We are saddened by the barbaric, repugnant and inhuman treatment meted out on a woman beaten and paraded naked around the town of Aguleri in Anambra State, Nigeria.

“The woman, accused of being the cause of the death of her husband who allegedly died during intercourse
with her, could be seen on social media platforms, paraded, taunted and beaten by the villagers.

“LAW – P by this statement does not only vehemently condemn this dastardly act, but is also deeply
embarrassed that acts such as this happens in Anambra State; the Light of the Nation in the 21st Century.

“It is particularly disheartening that this is happening at a time when the protection of the rights of women, girls and widows have taken center stage globally.

“This is where the vital role of education in the avoidance
of this level of barbarism becomes imperative. We can all agree that an enlightened community would rather protect the victim than violating her dignity and right.

“This is unacceptable; nothing short of man’s gross inhumanity to man, should be condemned in totality
and all perpetrators be brought to book.

“This said, there is need for concerted efforts in a bid to
eradicate this savagery that do not only harm the victim but also ruins the innocence of the children who either witnessed or joined in this vile parade.

“The League of Achina Women Professionals therefore, urgently calls on all women and men; the community; rights activists and advocates; the State and Nigeria as a whole to wake up for the time to act is now.

“Let us jointly protect the woman, the girl child and the widow.”