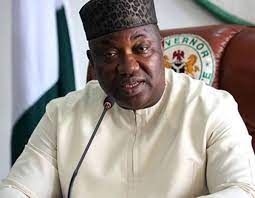 The State Chairman of ATRTU, Mr. Benjamin Ikah, gave the commendation while speaking with newsmen on Sunday in Enugu.

Ikah spoke on the sidelines of a birthday goodwill message sent to Ugwuanyi as he clocks 58 today, Sunday March 20, 2022

He said that the massive rural link roads, which span about 450-kilometer across the length and breadth of the state, had improved commercial tricycle business and checked tear-and-wear on the tricycles.

The chairman said that at the urban level, the governor had built more streets and avenue roads; thus, extending the commercial tricycle viability and reach to all nooks and crannies of the metropolises within Enugu and Nsukka.

“We the commercial tricycle riders ply our trade more in the internal routes within streets, avenue and rural areas; since we only take the major roads briefly as a link between one part of a town and another.

“The new rural link roads as well as new street and avenue roads have seriously improved the lot of the commercial tricycle operators within the state and increased accessibility and take-home gains of operators as well.

“As an association, we thank our amiable Gov. Ifeanyi Ugwuanyi for his developmental vision that has made all these possible just in a few years in office,” he said.

Ikah also thanked the governor for his huge investment in security, streetlight system and peace, which had created a socioeconomic peaceful atmosphere for commercial tricycle operation.

See also  2023: THE GATHERING STORM IN ENUGU - BY JUDE OSSAI/ENUGU

According to him, with this positive socio-economic development, the state and its residents enjoy robust night life which commercial tricycle operators are taking advantage of.

“The governor’s huge investment on security, provision of a daily functional streetlight system and sustenance of both industrial and political peace is greatly robbing off on our members’ operations in the state.

“The present night life has further made our members operate beyond evening hours to the stipulated termination time of 9p.m. as well as eliminated the issue of snatching of tricycles at gun point within the state,” he said.

The chairman said that the association was wishing Ugwuanyi, who is ‘a governor with a milk of human kindness in him’, a happy birthday and more divine health and blessings going forward.

“We are rejoicing with our own, a friend and father, His Excellency Gov. Ifeanyi Ugwuanyi as he clocks 58 and wish him divine prosperity and protection. ATRTU is pledging our total commitment to him and his administration,” he said.