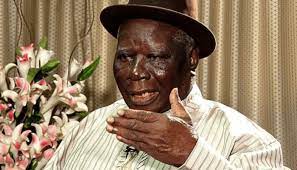 Clark also challenged Ijaw leaders and stakeholders to support projects and initiatives aimed at documenting the culture and the struggles of the people of the region for the benefit of younger generations.

He spoke at the official public presentation and launch of a book entitled, ‘Culture, Environment and The Niger Delta Question

The book is in honour of Professor Benjamin Okaba, President of Ijaw National Congress, held at the Federal University Otuoke (FUO), in Bayelsa.

The 486-page book with 35 chapters edited by Prof. Edet Abasiekong and Dr. Raimi Lasisi, was written by 47 contributors, including academics, many of whom were mentored by Okaba, who is currently the Dean, School of Postgraduate Studies, FUO.

Clark was represented by Dr. Boladei Igali, a former Nigeria Ambassador to the Scandinavian countries.

“Ijaw and Niger Delta leaders have to be more interested in funding a lot of research on the Niger Delta.

“We must be able to document and gather data and publish so that the younger ones can have what to fall back on. This is a wakeup call for all of us.”

He described Okaba as a great Ijaw man, noting that the book is “a wide kaleidoscope of knowledge” as it touches on all areas of the Niger Delta.

Former President Goodluck Jonathan, who was represented by a former Bayelsa Commissioner for Education, Tobias James unveiled the book to the audience.

He noted that the INC president had made giant strides in his academic career and deserved the honour bestowed on him.

Also speaking, the Bayelsa State Governor, Douye Diri who was represented by his Technical Adviser on Higher Education, Isaiah Stephen applauded Okaba for his scholarly attainment and recommended the book for all higher institutions.

In their separate remarks, the chairman of the occasion and monarch of Kala Ogoloma in Rivers State, Goddy Idikisime-Olunwa, and the Vice-Chancellor of FUO, Prof. Teddy Adias said they were impressed by the activities of Okaba as a cerebral academic and activist.

“As a social ecologist, Prof. Okaba’s scholarship interrogates the undue suffering in the Niger Delta because of the extreme violation of the people’s environmental rights and environmental goods”, Adias noted.

Okaba thanked the editors and contributors of the book for honouring him, adding that “it is a demonstration of people’s acknowledgment of my little contribution by way of mentorship and tutorship.”

The INC leader said he was humbled by the recognition and celebration of his modest contribution in the areas of culture, environment and the Niger Delta question in theory and practice.

According to him, the honour would spur him to render more service to Ijaw land.