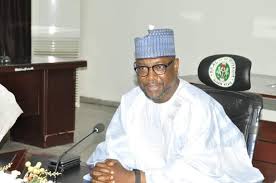 For every event, there is always a trigger. The history of the just concluded national convention of the All Progressives Congress (APC),  cannot be written without the pivotal role of the governor of Niger State, Abubakar Sani Bello.

Recall that preparations for the APC national convention was in a state of push and pull or lull, until, Governor Sani Bello, who also doubled as the Chairman, North Central Governors’ Forum, took over as the Acting Chairman 2022 APC National Convention, on 3rd March, 2022, following the absence of Governor Mai Mala Buni, on medical grounds.

His subsequent actions became the catalyst that propelled the APC Convention. It should be placed on record that immediately he took over; he reinforced the inevitability of holding the convention on 26th March, 2022.

His declaration came at a time of huge uncertainties for the party, and became the needed vitality for members, who committed and redoubled their efforts towards a successful Convention.

Without an iota of a doubt, he demonstrated courage, spirit of sacrifice, loyalty, selflessness, love and togetherness in his commitment towards delivering a successful and rancour free APC National Convention.

Upon stepping in, he immediately swung into actions geared towards achieving the set date for the National Convention. Some of the actions he took were the inauguration of State Chairmen of the Party, adoption of zoning formula from the Zoning Committee, adoption of some relevant documents and inauguration of sub-committees for the National Convention

Governor Sani Bello, received accolades from the CECPC Chairman Mala Buni, upon his return from medical trip as he was satisfied with the level of preparations towards the convention, thereby validating all that was done under the leadership of Governor Sani Bello.

The governor was again given the responsibility of ensuring smooth preparations for the event, a task he diligently carried out successfully as he was at the Eagle Square, venue of the event at different dates to see  to the progress of preparations.

He had several interactions with various sub-committees to ensure things went on smoothly.

As if that was not enough, on the day of the National Convention, Governor Sani Bello was at the venue early enough to see that things are carried out without hitches.

He went as far as visiting delegates from various states, interacting with them to give them a sense of belonging.

The efforts can be said to be worthwhile as the desired result of a successful and rancour free National Convention has been achieved. Cumulatively, this has heralded a new National Working Committee, NWC of the APC.

Suleiman D. Ibrahim, is a political analyst and commentator