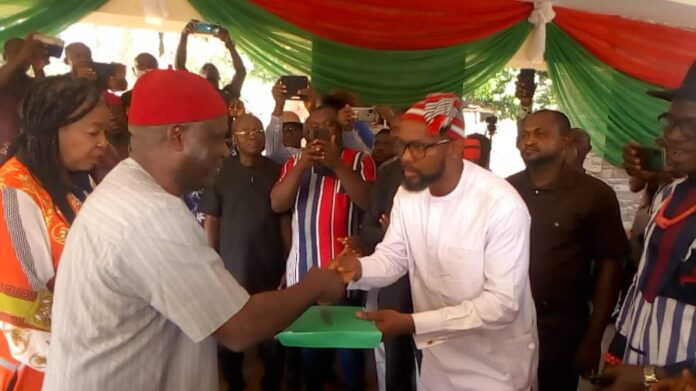 Former Minister of Power Prof. Barth Nnaji, on Sunday joined the 2023 Enugu governorship race on the platform of the People’s Democratic Party (PDP), saying that incumbent Governor Ifeanyi Ugwuanyi, should  choose his successor.

Prof. Nnaji who spoke on Sunday in Umuode his country home,  in Nkanu East Local Government Area of Enugu state, after the New Enugu State Coalition for Good Governance presented him with PDP Governorship Expression of Interest and Nomination forms, promised that if he becomes the next governor of the state, his administration would engage the private sector to build industries and create jobs for the teeming unemployed youths.

He thanked the organisation for using its hard-earned money to purchase the forms, and maintained that the if given the opportunity to serve his administration would lift the state and its people to greater heights.

“This is an extraordinary gesture.  I thank you you for considering me worthy enough to lead Enugu state, and for sacrificing your hard-earned money to buy forms for me to embark on this journey.

“It’s difficult for someone presented with this challenge to say No,   particularly when the people to be served, had gone ahead to get the instrument with which the person will undertake the race,” he said.

Howeve, the Chief Executive Officer, Geometric Power Project, maintained that it behoves on Governor Ugwuanyi to choose his successor.

“ I have accepted the form which you procured for me, but It’s the governor that  will determine who will go because he is in-charge of the process.  But all we know is that what we are doing is the correct thing, and  we hope that the governor will work with us to see that we arrive there,” he further said

Speaking on the issue of zoning of political offices in the state, Prof. Nnaji said that it is the turn of Enugu state senatorial zone to produce the next governor, and urged the people of Enugu West and North Senatorial zones, to support the zoning arrangement in the state.

Speaking earlier, the leader of New Enugu Coalition for Good Governance, Mr. Ekene Uzodinma, described Prof. Nnaji as the most competent among the governorship aspirants to take over from Governor Ugwuanyi.

take over the governance of Enugu state from the incumbent Governor Ifeanyi Ugwuanyi in 2023.

“We did not decide on Prof. Nnaji because he comes from Enugu East Senatorial zone, but we have chosen him because he is the most competent person among the gubernatorial aspirants to take over the mantle of leadership from Governor Ugwuanyi, in 2023,” he said.