HomePolitics"It is amusing for people to call me former governor,"---Umahi - By...
Politics

“It is amusing for people to call me former governor,”—Umahi – By Reginald Okoro/Abakaliki 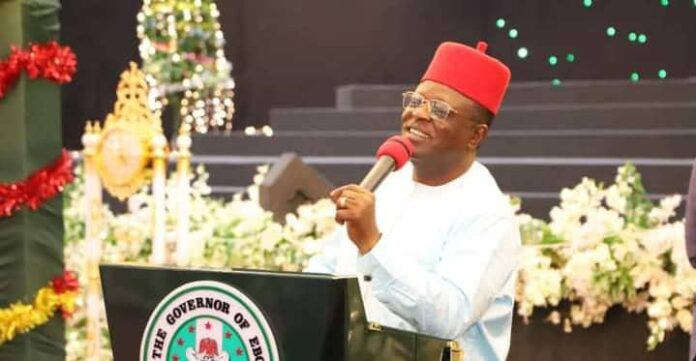 Governor David Umahi of Ebonyi state, has described as amusing, the tendency among some people to call him a former governor due to the outcome of an Abuja High Court judgment over his defection.

It would be recalled that the court presided over by Justice Inyang Ekwo, ruled that Umahi and his Deputy, Kelechi Igwe, should vacate office for defecting from the Peoples Democratic Party (PDP) to to the All Progressives Congress (APC).

Umahi, however, appealed the judgment, and on April 1, the Appeal Court sitting in Enugu affirmed an Ebonyi High Court judgment that the governor did not err before the law by defecting.

Umahi made the assertion in Abakaliki during a special thanksgiving service to celebrate the appeal court’s judgment.

According to the governor, it was amusing that people who have never been councilors would be calling him a former governor.

“The important thing, however, is that there is still governor inside the former governor they call me.

“They see a very tough governor who is sitting very well on his seat and still call him a former governor.

“I am aware of those who don’t wish me well and if everyone wishes you well, what will you be praying for.

He remarked that the challenges he was facing gave him promotion and he bore no ill-feelings against anyone.

“I am presently a consultant in conflict resolution and any one God leads through obstacles should not look back.

“These people are still my friends, not enemies and I am looking towards completing my tenure and having a smooth transition.

“We are preaching that bitterness, anger and jealousy hinder movement but forgiveness sets captives free.

Umahi said that he will correct his past mistakes by not annointing anyone for elective positions but allow God and the people do so.

“I tried doing so in the past but it has not worked and will fully support those selected by God and the people.

Mrs Eunice Oyeyemi, the Officiating Minister at the service urged the governor to be steadfast in his confidence in God and delivery of service to the people.

“The Easter period should be that of repentance, forgiveness and renewal of faith in God.

The suit at the state high court challenging the governor’s defection was from the APC gubernatorial flag bearer in the 2019 election, Sen. Sonny Ogbuoji and his running mate, Chief Justin Ogodo.