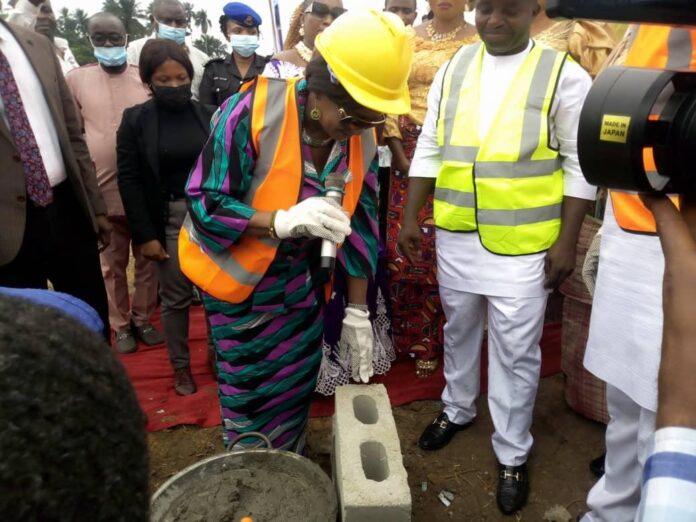 There was palpable excitement on Friday, April 1, 2022, among residents of Port-Harcourt, the Rivers state capital, especially the business community, following the relocation of markets for building materials from all the major roads and streets in the city to Mbodo Aluu, Ikwerre LGA of the state.

Addressing Journalists at the sideline of the ceremony at Mbodo, Aluu, Ikwerre LGA, the Vice Chairperson of Garden City Building Materials Dealers Association (GCBMDA), the sole owners of the building materials market;  Lady Chinwe Ukaegbu, expressed gladness that the effort of her association towards relocating to a permanent site had gained momentum.

”I thank God for enabling us to acquire this site to expand our businesses. We appreciate the Mbodo Aluu community for their kindness to our association.

“We won’t thank Samuel Nwanosike the Chairman of Ikwerre LGA enough, he gave us all the opportunity and assistance to see that this project got to this stage. We are praying that God will provide us the resources to complete this project.

“We are also appealing to Rivers state government to assist us to build road network in the market and other infrastructures. As you can see, this a large market that will improve the welfare and wellbeing of the people in this area,” she said.

Comrade Iheanacho Hyacinth, President Pillar of Association Rivers state, (the umbrella body of trader’s association in Rivers State) who was one of the special guest at the event congratulated the Garden City Building Materials Dealers Association, for taking the bold step to purchase such  a massive land in Ikwerre LGA..

“Seeing  the vast area they acquired we believe that when they might have finished building this market they will have something uncommonly reasonable they have achieved in life. Even the people that will join the later will see what the present leadership of Association has done.”

Comrade Iheanacho advised Rivers State government to leverage on the opportunity and encourage the union by providing the needed infrastructure within the market, and site other developmental projects in the area.

”The state government should assist them to built internal road network, provide security, fire service, electricity, internal roads network in other to conclude this project within the life of your administration.”

The visibly elated Chief Patron of GCBMDA, Chief Ugo Cele, Mirindu Ogwa, described the event as a dream come through, noting that the site of the market is inline with the Rivers State programme of bringing Port Harcourt to its garden city status.

”Members of Garden City Building Materials Dealers Association are very happy to witness the commencement of this project because it  is what we have been yearning for.

“It will help to expand our businesses and also attract development to this area. As you can observe, we are here to witness the ground-breaking ceremony of our project the Ultra Modern Building Material Market in Rivers state; We thank God for today that the project is starting in full swing. My association is working toward the mind of Governor Nyesom Wike to decongest Port Harcourt City. This will create employment to the people in this area.”