2023: Ebonyi Royal Fathers Under Fire Over Endorsement of Sacked Speaker for governor – By Reginald Okoro 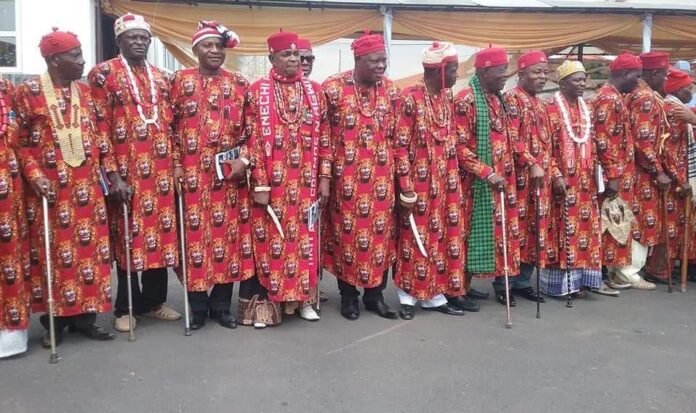 Traditional rulers from Izzi, a clan in Ebonyi have come under severe criticism for open involvement in partisan politics in the build up to the 2023 general elections.The royal fathers came under attacks when a section of traditional rulers from the Izzi clan of Ebonyi announced endorsement of Mr Francis Nwifiru, embattled Speaker of the Ebonyi House of Assembly to succeed Gov. Dave Umahi in 2023.Izzi is a clan in Ebonyi North Senatorial District.

The zone is comprised of Abakaliki, Ebonyi, Izzi and Ohaukwu local government areas of Ebonyi.Ebonyi has a tradition of rotating governorship position among the three Senatorial zones of the state. It was under the arrangement that Sen. Sam Egwu from Ohaukwu LGA, representing Ebonyi North zone Senatorial district was elected in 1999 as the first civilian governor.Chief Martin Elechi from Ikwo LGA in Ebonyi Central emerged as governor in 2007 while Chief Dave Umahi from Ohaozara LGA in Ebonyi South Senatorial District was elected in 2015.Ebonyi North zone believes that governorship position should return to the zone in 2023 when Umahi who is from South must have completed his second term in office.Reacting to the endorsement saga, some pro-democracy pressure groups working to actualise Ebonyi governor of Izzi extraction at a joint press conference on Thursday in Abakaliki chided the royal fathers for dabbling into politics.

The Izzi Agenda (IA), Ebonyi Connect Initiative (ECI) and Izzi People in Diaspora (IPD) condemned the action of the royal fathers stressing that the endorsement did not represent the collective interest of the Izzi nation. The groups noted that outrage, condemnation and anger had continued to trail the purported endorsement of the embattled speaker.According to them, critical stakeholders from different political backgrounds from the area have distanced themselves from the alleged endorsement saying that the traditional rulers had over stepped their bounds and must be called to order.

Mr Shadrach Nwite, National Secretary and Mr Jerry Oyibe, Coordinator, Media and publicity of Izzi Agenda respectively said the group after a critical review of the pronouncement of the traditional rulers said that the royal fathers had not spoken for the people.

They said: “Whatever the traditional rulers said at the Ebonyi Broadcasting Corporation (EBBC) doesn’t in any way portray the collective position and decision of the good people of Izzi and shouldn’t be taken seriously. “The action of the few royal fathers is a desperate act of compromise and biased mind in a haste to force their selfish interests on the teeming people of Izzi Nnodo.”The group which flatly rejected the endorsement urged the Izzi people and Ebonyi electorate to discountanence the alleged endorsement.Mr Chidubem Okemini, president of Ebonyi Connect Initiative while condemning the action of the traditional rulers advised them to always put the interest of Izzi above personal or narrow group interests. They acknowledged and regretted the likely crisis the alleged pronouncement was causing in Izzi land and called on the traditional rulers to withdraw the statement and tender unreserved apology to the people.Meanwhile, Dr Emeka Nwite, president of Izzi People in Diaspora advised the royal fathers to stay off partisan politics.

They group urged the traditional rulers to concentrate on carrying out their assigned roles as the custodians of culture and traditions of the people. “The journey of the traditional rulers to EBBC led by Ezeogo Fidelis Nwonumara is a divisive ‘voyage’ and a mission to destroy their own land. “The traditional rulers have succeeded in setting Izzi sons on head-on-collision against one another and that the crisis which their unguarded statement is generating is not healthy for the corporate interest of our people at this time,” Nwite said.

Summitnews recalls that traditional rulers in Izzi clan led by Nwonumara of Amegu community in Abakaliki LGA on Monday paid a courtesy visit to Mr Timothy Nwachi, Director-General of EBBC and endorsed the sacked speaker for governor.Our correspondent further recalls that Chief Elias Mbam, chairman of Revenue Mobilisation Allocation and Fiscal Commission (RMAFC); Chief Edward Nkwegu and Nwifiru all from Izzi are major contenders in the gubernatorial ticket from the All Progressives Congress (APC).

Chief Sylvester Ogbaga, a serving member of the House of representatives representing Abakaliki/Izzi federal constituency and Chief Fidelis Nwankwo, all members of the people’s Democratic Party (PDP) and also from Izzi have declared their interest to run for governorship in 2023.