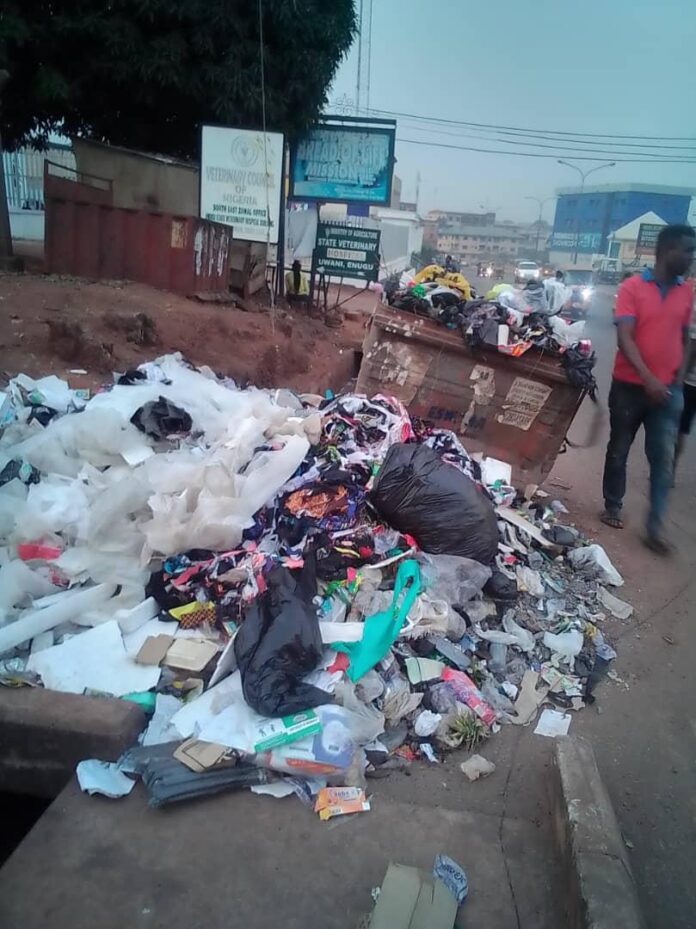 There seems to be a deliberate plan on the part of the relevant authorities in Enugu State, to convert  Enugu, the one-time capital of former Eastern Nigeria – and currently capital of Enugu State into a massive refuse dump.

Today, many roads and streets of the once clean, refreshing coal city, are littered with garbage, and as a result,  the whole place reeks of extremely unpleasant smell.

According to our roving Correspondent, the  over-flowing garbage,  remain uncleared for days and weeks in the thickly populated Abakpa and Obiagu areas of the city.

And from Old Park to Uwani/Garki, the story remains the same.

Even the high-brow areas of Trans-Ekulu, and Independence Layout, are not spared of mounting refuse dumps.

In-fact, the swelling refuse dump in front of  the National Open University of Nigeria (NOUN) along Nike Road, has expectedly polluted the ambient air quality of the area such that students and visitors  to the federal government-owned facility are at risk of contacting air-borne diseases.

It would appear that the Enugu State Waste Management Agency (ESWAMA), which is statutorily charged with the responsibility of clearing and managing  waste in the State, especially  in Enugu and Nsukka urban areas have literally closed shop.

Our Correspondent gathered that clearing of refuse in Enugu became a huge problem shortly after a private  firm (names withheld) took over from  ESWAMA the responsibility of ridding the city of wastes at a sum running into several millions of naira every month, and  far beyond the subvention  the state government was paying ESWAMA monthly or yearly for the same purpose.

But this could not be confirmed at press time on Friday.

Nevertheless, it seems this private company lacks the capacity  and competence to face the challenges inherent in clearing urban refuse.

Unfortunately, the refuse problem may remain for a long to come because  politicians are engrossed on how to capture power in the forthcoming general elections.