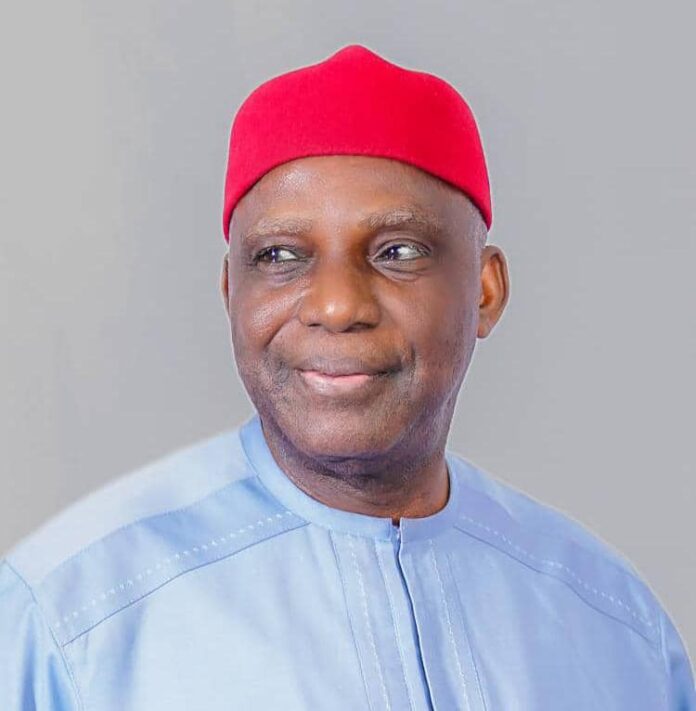 Prof. Nnaji:  The first Nigerian to increase electricity generation in Nigeria to about 5,300 megawatts and all of it was successfully put on the national grid.

Enugu State is indeed blessed with numerous sons and daughters who by distinguishing themselves have emerged global citizens and the Nigeria’s former Minister of Power who had also served as Minister of Science and Technology Prof. Bartholomew Nnaji, OON, CON, NNOM, FAS, FAEng stands out among them in all ramifications, in consideration of his mind-blowing achievements in his chosen field of endeavour. Prof. Bart Nnaji is a native of Umuode in Nkanu East Local Govt. Area of Enugu State.

Prof. Bart Nnaji, a true and core son of Igbo land had his elementary school at St James’ Isigwe, Ugbawka in Nkanu East LGA and St. Anthony’s Obe in Nkanu West LGA respectively. He finished with Distinction. He also attended the famous St. Patrick’s College, Emene Enugu where he excelled in academics as well as in sports.

Prof. Nnaji is a grassroots man who in 1975/1976 with the legendary International Goalkeeper, Emmanuel Okala of the (Flying Antelopes), Rangers International Football Club of Enugu, represented Ndigbo of the then East Central State at the national sports festival. He competed in track and field events and came home with laurels.

After he graduated from St. Patrick’s Emene, due to his sporting prowess, he got a job at the Enugu Sports Council and later secured admission abroad on scholarship.

He is a member of Sports Hall of Fame of  St. John’s University, New York.

Due to Prof Nnaji’s drive for human empowerment and to really crystalize this, Geometric Power Ltd has its catchphrase as… _”…Empowering the people”_.

Prof. Nnaji is the first black man in American history to be bestowed with the title of Distinguished Professor of Engineering.

The first Nigerian to win the Baker Distinguished Research Award which is considered the equivalent of the Nobel prize in Industrial Engineering.

The first African to write a book which was declared the best book in manufacturing engineering of the year throughout the world.

The first Nigerian to be honoured by the World Bank and the International Monetary Fund as the African Scientist of the year.

The first black man to graduate as the best student of the year at St. John’s University in New York which was 120 years old then.

The first indigene of Enugu State to win the Nigerian National Order of Merit, NNOM which is Nigeria’s highest honour for intellectual and artistic achievement.

The first Nigerian to increase electricity generation in Nigeria to about 5,300 megawatts and all of it was successfully put on the national grid.

The second Minister to come from Nkanuland in Enugu State.

In 1993, at Okpara Square, Enugu, all the Traditional Rulers in Nkanuland conferred on on him the traditional title of Onwa Nkanu.

It will be recalled that no sooner had he become a professor at less than 29 years of age in 1983 at the University of Massachusetts than he set up the Bart Nnaji Foundation from which over 400 persons have benefitted. Some of the beneficiaries are today distinguished lawyers, high court judges, academics and other professionals.

He has awarded overseas scholarships for postgraduate studies to brilliant students who are today executives in places like Ford Motors and the Lagos Business School, and none of them is a member of his family. Prof. Nnaji has built houses for widows and paid school and medical fees for numerous orphans and other indigent individuals without ever letting such acts go public.

When the residence of the parish priest of St. Rita’s Catholic Church Umuode was burnt, Nnaji wasted no time in moving the priest to his own residence. Needless to state, he is the pillar of St. Rita’s Parish Umuode.

In Nnaji, one sees a human manifestation of the scriptural saying that there is no love greater than the fact that a man should lay down his life for the benefit of his people.

Apart from his overwhelming intellectual accomplishments and penchant for transparency and accountability in all his dealings, there is an aspect of Prof.  Nnaji’s life many Nigerian’s do not seem to know: A life of sacrifice.

He lives almost entirely for others. He leaves no one in doubt about his ability to transform our economy and introduce sound leadership ideas to drive rapid development in all sectors of the economy, including job creation, agricultural revolution, improved security among other laudable initiatives.

It is no wonder therefore that a coalition of different concerned Enugu groups and citizens who have yearned for a paradigm shift in our political trajectory, taking a leaf from Anambra State, are calling on H E, Ifeanyi Ugwuanyi, all stakeholders, and the entire Ndi Enugu to support this great achiever, Prof. Bart Nnaji, to occupy the Enugu Lion Building in 2023.

~Scripted by Afam Okafor and

sponsored by The New Enugu Coalition for Good Governance