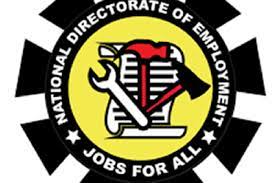 The National Directorate of Employment, NDE, has commenced the training of 100 unemployed persons in Enugu State under the  Sustainable Agricultural Training Scheme, (SADTS), as well as given refundable loan of N100,000 each to 38 beneficiaries who underwent the Directorate’s empowerement programmes.

Speaking at the flag-off/orientation of the schemes, the Directorate General of NDE, Mallam Abubakar Nuhu Fikpo, represented by the Enugu State Coordinator, Mr. Donatus Azubuike, said that the Directorate was desirous of creating jobs through such empowerment programmes.

He emphasized that agriculture is the easiest and the best way to make money these days instead of seeking for paid jobs.

“If you want to be successful in life, you don’t crave for paid employment.  There is a lot of money in agriculture today.  There is no unemployment for people who embark on various departments of agriculture,” he said.

Fikpo noted that NDE train people on various agricultural schemes to empower them to help themselves, pointing out that in less than five years, the beneficiaries would been established to become prominent men in the society.

He noted that though the financial empowerment might be big but that if utilised well, the sky would be their limit.

Also speaking on behalf of Rural Employment Promotion, REP, Department of NDE, Dr. Sylvester Ekemhonye, said that those that venture into agriculture have nothing to regret because the gains are enormous.

Ekemhonye pointed out that what mattered most was not the soft loan but what the beneficiaries would do with them to better their lot.

According to him, there were various agric schemes one could go into such as snail farming, horticulture, piggery, poultry among others and urged the participants to take their training serious.

“A lot of persons have undergone the training and have utilised the opportunity.  Take the training serious because there is future in it for you,” he said