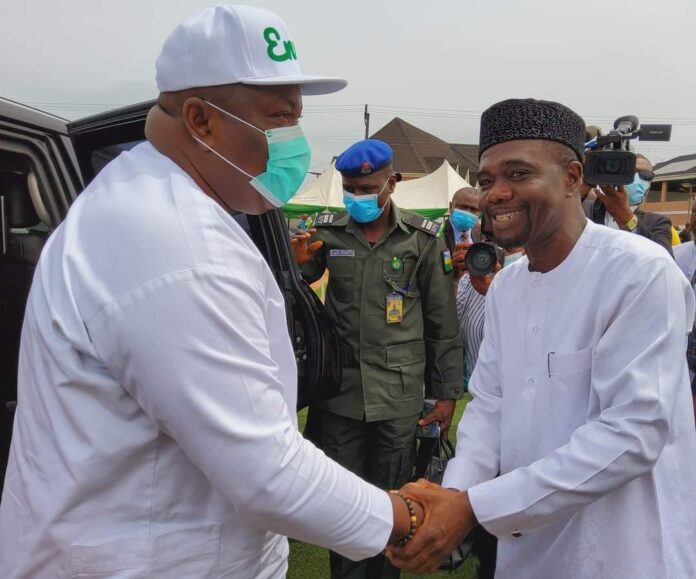 Gov. Ugwuanyi (left) being welcomed on arrival by Hon. Agballah

The chairman of the APC,  Enugu state, Agballah, used the occasion on Tuesday to hand over 150-bed hostel to Matter Dei Secondary School Udi in Enugu state.

Other dignitaries at the function include representatives of the Vice President, Yemi Osinbajo; Imo State Gov Hope Uzodimma; Minister of Foreign Affairs, Geoffrey Onyeama, among others.

But conspicuously present were two political gladiators in the Peoples Democratic Party (PDP), Ugwuanyi and Ekweremadu, who are currently battling for the soul of PDP in the state.

Their appearance at the function has fueled speculations that either of them was negotiating for eventual decamping to APC, should any of them fail to realize their objectives in PDP after the party’s primaries.

Both political leaders said their appearance at the event was an honour to Agballah and his parents, especially his father, Petrus Agballah, a minority leader in the old Anambra state House of Assembly whom they described as a well respected and disciplined politician and philanthropist.

Speaking at the event, Agballah said the hostel bloc was in support of education and part of Igbo spirit of self help in communal development.

He announced that his family has concluded plan to float a mobile information and communication technology facility to help students in various communities in the state.

“My parents gave their best to the society and educational development. Both are very committed to human resources development. My father in particular gave almost all he had away before his death.

“I’m a beneficiary of his investment in human resources development… My family and I will spare nothing investing in education.

“What I’m doing is not enough, its like a drop in the ocean. But its a call to others and all of us to do our best,” he said.

On the political development in the state and how APC was planning to end the political monopoly of PDP in the state, Agballah said that the ruling PDP was already working for APC and against itself by abdicating its responsibility in providing water, quality education, infrastructure and good governance to the people.

“APC will definitely win the next election, Enugu is yearning for change, its something that is inevitable.

“Selectocrary is what is happening in PDP, whereby everybody is waiting for the governor to select people for offices. It’s wrong, it’s anti democratic, but that’s the system operating in PDP from the  national to the state level.

“But that will not be operated in APC under my watch. We are going to open the political space. So why are people crowding in one party when they can come in another party and actualize their aspirations?

“It’s obvious most of our leaders are suffering from inferiority complex. As an individual I entered a party that was hitherto unknown, a party that was three months old, APGA, and I used APGA to win the governorship of Enugu state.

“It’s a fact, an imperial fact that I won the election of Enugu state in 2003 and 2007, and I was elected but undeclared governor of Enugu state.

“If I could do that over 15 years ago, why can’t these men killing each other in one party move to another party and build it. And if a leadership suffers from inferiority complex they are not worthy to be given the leadership of the state because they lack courage.

“It’s only a courageous leader that can take Enugu state to the next level,” he declared.

“We thank God that our brother Ugochukwu Agballah undertook to build a hostel for the school. Ugo is following the foot steps of his father and his love for education,” he said.