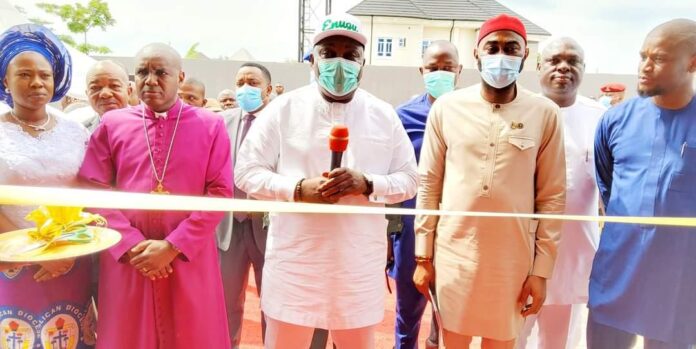 The Anglican Bishop Nike Diocese, Rt. Rev. Dr. Christian Onyeka Onyia, has described Governor Ifeanyi Ugwuanyi of Enugu State as a prayerful man who devotes most of his time at night to pray for the progress of the state.

Bishop Onyia also described Gov. Ugwuanyi as a good man, stressing that the governor is equally a peaceful man.

The Cleric told the governor that it was “because you are a peaceful and prayerful man that this state (Enugu) has remained peaceful”.

Speaking during the inauguration of Nike Diocesan Hospital, located at New G.R.A, Enugu, Bishop Onyia who thanked Gov. Ugwuanyi for honouring the invitation of the Diocese to inaugurate the hospital in spite of his tight schedule, pointed out that the gesture was an indication that the governor does not segregate between the Catholic Church and the Anglican Communion.

“I know you have an activity somewhere now but you moved that one to be here. We sincerely appreciate you for that. We are not taking it for granted”, he said.

Describing Gov. Ugwuanyi as a prayerful man, Bishop Onyia said: “It is obvious this is part of the strong reasons why this state has been so peaceful. Prayer works; prayer has an answer to everything and because you have devoted your time to pray, God will never allow you to make mistake at any point particularly in this critical season of making a choice of who comes after you.

“We are also standing in the place of prayer for you and the whole state and we will continue to pray that God will lead you aright. You have supported us and we are grateful for what you have done”.

See also  2023: THE GATHERING STORM IN ENUGU - BY JUDE OSSAI/ENUGU

The governor expressed satisfaction with the quality of work done at the facility.