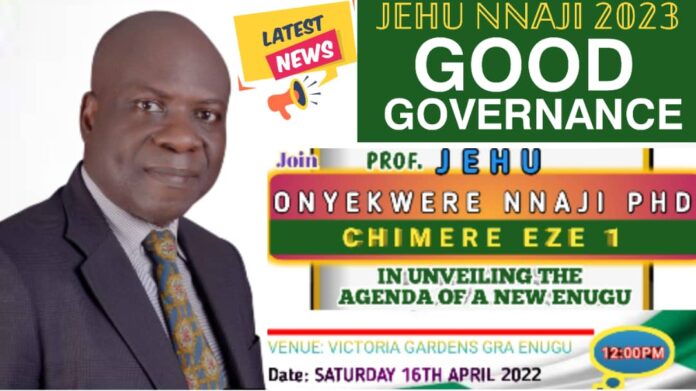 A Professor of International Relations and Global Politics,  Jehu Onyekwere  Nnaji,  has declared his intention to contest for the Enugu governorship seat in 2023.

Nnaji made his intention known on Monday in Enugu while interacting with newsmen.

Professor Nnaji  said his decision to contest for governorship seat in the state was in response to the call by youths and women across the state for him to throw his hat into the ring.

The governorship hopeful pointed out that his wealth of experience, especially as a lecturer in United States of America (USA) had prepared him adequately to undertake the task of governing the state effectively.

Under him, Nnaji maintained, the state would witness unimaginable transformation and visionary leadership, which would be championed by technocrats team.

According to him, his administration will focus on developing critical sectors of the state’s economy, with more attention on industrial development of the state.

He enumerated his programme, if elected, as governor, to include women empowerment, quality education, proper agriculture, adequate food security, good governance, water and quality healthcare delivery for the residents of Enugu state.

Nnaji gave the assurance that he would vigorously pursue holistic implementation of his government’s programme and policies.

He expressed the believe that he had what it takes to win the Peoples Democratic Party (PDP) , governorship ticket during the primaries, to enable him move the state to another round of development.

Nnaji then appealed to those who had not gotten their Permanent Voter’s Cards (PVCs) to do so, to enable them vote in 2023 elections.