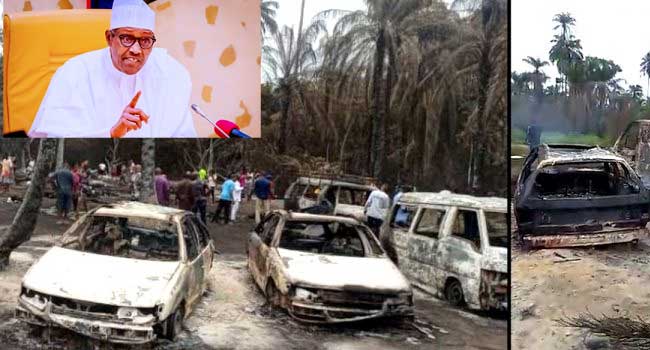 A photo combination of President Muhammadu Buhar and the scene of an explosion that rocked an illegal refinery in Imo State.

President Muhammadu Buhari, has mourned the victims of an explosion that rocked an illegal refinery in Imo State and also ordered an intensified clampdown on illegal refining sites across the country.

About 100 people were killed on Friday after a fire engulfed an illegal crude oil refining site in the Abaezi forest, in Ohaji-Egbema Local Government Area of Imo State.

Two days after the tragic incident, President Buhari described the explosion as  a “catastrophe and a national disaster.”

In a statement issued on Sunday by his media aide, Garba Shehu, the Commander-in-Chief said the responsibility for the loss of lives and property must squarely lie with the sponsors of the illegal refinery, “who must all be caught and made to face justice”.

The President conveyed “the condolences and the full depth and range of the nation’s shock and trauma” to the families of the victims, the Ohaji Egbema community, and the government and people of Imo State.

To forestall a reoccurrence of the incident, the President ordered the armed forces, security, and intelligence agencies to intensify the clampdown on illegal refineries.

This is even as he urged community leaders, the police, and the secret service to never allow the occurrence of the heart-breaking incident in any part of the country again.

Meanwhile, the Imo State Governor Hope Uzodimma, has commiserated with the families of affected victims.

He, however, explained that running an illegal refinery in the area amounted to economic sabotage to the state and the nation and a criminal act that all should desist from.

The governor warned those still in the business of running illegal refineries in the state to stop forthwith or face the wrath of the law.

Illegal refineries have remained a menace, posing an environmental and economic threat to the nation and resulting in condemnation and crackdowns by the government – especially in the South-South.

Earlier this month, amid reports of widespread crude oil theft and the environmental impact of illegal refineries – evident in the soot problem in Rivers State, the Nigerian Navy launched an operation to combat the threat.