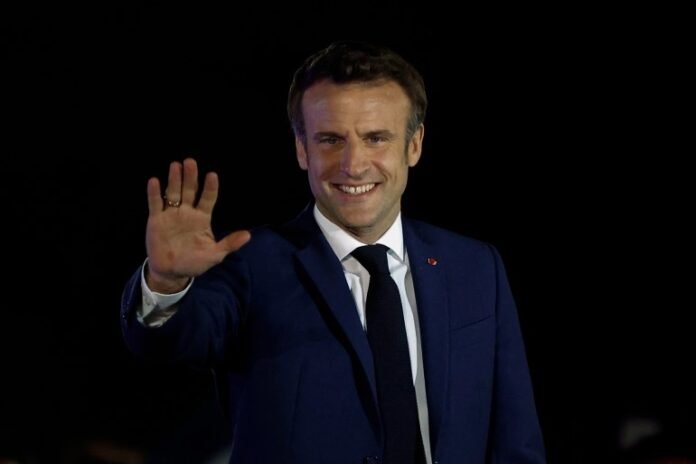 French President Emmanuel Macron, has defeated his far-right rival Marine Le Pen by a comfortable margin in a runoff election and has won a second term, early projections by pollsters showed.

The first projections showed centrist Macron securing around 57-58 percent of the vote in Sunday’s runoff. Such estimates are normally accurate, but may be fine-tuned as official results come in from around the country.

Le Pen, the candidate of the far-right National Rally party (Rassemblement National or RN), received 41.8 percent of the votes, the highest in her last three unsuccessful presidential bids.

In a victory speech on Sunday evening, Macron said a simple “thank you!” and praised the majority who gave him five more years at the helm of France.

He arrived on the plaza where his supporters gathered, beneath the Eiffel Tower, to the sound of the Ode to Joy, the European Union’s anthem, hand in hand with his wife, Brigitte.

“I’m not the candidate of one camp anymore, but the president of all of us,” he said.

Le Pen conceded defeat in a speech shortly after the polling projections were released, but still hailed her result as a “brilliant victory”.

Promising to “carry on” her political career and saying that she would “never abandon” the French, the 53-year-old said: “The result represents a brilliant victory.”

But he would face a divided nation and a battle to keep his parliamentary majority in legislative elections in June. He is the third-ever French president to win two consecutive terms.

Pierre Haski, a veteran political commentator, said the legislative elections – commonly referred to as the third round – will be the new test for the political landscape in France, especially as support for traditional parties has drastically shrunk.

“You have three political forces,” he told Al Jazeera. “You have Macron’s centre, a major chunk of the political spectrum. You have Marine Le Pen, who has increased the number of votes in this election compared to previous ones so she’s a strong contender on the right. Then you have [leftist] Jean-Luc Melenchon, who did well in the first round and came in third and wants to take revenge in the parliamentary elections.

“The challenge for Macron is to have a majority because if he doesn’t, he will be forced into a different political orientation between the president and the prime minister, and that’s a source of tension and difficulties.”

According to the exit polls by Franceinfo, an estimate of 28.2 percent of the electorate did not cast their votes.

In a speech on Sunday evening, Melenchon said the campaign for legislative elections in June starts now.

Melenchon, who united the first-round left-wing vote around him and has already talked about himself as a future prime minister, urged voters who are unhappy with the system not to give up.

“The voters have spoken, Le Pen has been beaten, France clearly refused to entrust its future to her. Macron’s election is the worst result of the fifth republic. He swims in an ocean of abstentions and spoiled ballots,” Melenchon said.

“The political situation ahead of parliamentary elections forces us to act … the nationalist bloc needs to unite, nationalist movements must join forces,” said Zemmour, who was also a candidate in the first round of the vote but failed to make it to the second round.

In response to poll projections, European Commission President Ursula von der Leyen congratulated Macron in a tweet, saying: “I am pleased to be able to continue our good cooperation.”

“In these troubled times, we need a strong Europe and a France fully committed to a more sovereign and strategic European Union,” he tweeted in French.

Italian Premier Mario Draghi hailed Macron’s victory as “splendid news for all of Europe” and a boost to the EU “being a protagonist in the greatest challenges of our times, starting with the war in Ukraine”.

“France is one of our closest and most important allies,” Johnson wrote on Twitter. “I look forward to continuing to work together on the issues which matter most to our two countries and to the world.”