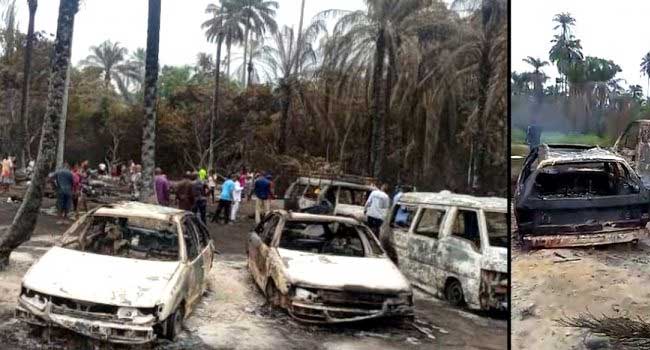 The Imo State government on Tuesday conducted a mass burial for the victims of the explosion that occurred at the site of an illegal refinery in the state.

This comes four days after scores of people were killed – many of whom were burnt beyond recognition on Friday last week at the scene of the explosion.

Channels Television had reported the incident at the unauthorised refining plant located within Abaeze, a community in Ohaji/Egbema Local Government Area (LGA) of the state.

The National Emergency Management Agency (NEMA) which led other relevant emergency agencies had declared that no fewer than 110 people lost their lives to the inferno.

Governor Hope Uzodimma was represented at the burial of the victims by the Chairman of Ohaji/Egbema LGA, Marcellinus Amadioha.

Amadioha described the incident as unfortunate, promising that the government and all relevant stakeholders would ensure to prevent a reoccurrence of such incident.

He explained that the relatives of the victims had come to claim the remains of those they could identify while scores of others were given a mass burial.

“There are over 100 people but some of them have been identified by their relations. The remaining – over 50 of them – that nobody could identify, we are here to bury them as humans and a responsible government.”

The local government boss stated that in the meantime, the whole area would be fumigated to enable residents of the community to go to farms and carry out their normal business activities.

Present at the burial included officials of the state ministry of health, Red Cross, NEMA, other government officials, and villagers