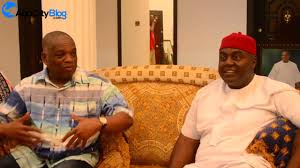 Senator Kalu (left) with Hon. Atuma (right) during the visit

The Chief Whip of the Senate, Senator Orji Uzor Kalu, has said that he will only support a governorship aspirant who will work to develop Abia state when elected.

Kalu said this on Tuesday, when a governorship aspirant on the platform of the All Progressives Congress (APC) Hon. Emeka Atuma visited him in his Camp Neya country home in Igbere, Bende Local Government Area of Abia state.

He said that Atuma, who came to intimate him about his aspiration, was the third aspirant to solicit his support.

He said, “I will only support an aspirant who is ready in spirit and conscience to develop the state and ensure that commerce and industry thrive.

“I will support anybody that will ensure that there is free education for children to go to school, pay workers’ salaries and build infrastructure.

“By this visit, you have demonstrated that you are running for governor.

“I wish you well and I know that if you become governor, you will do well,” Kalu said.

He advised the governorship hopeful to continue to consult with other stakeholders.

He said he was hopeful that APC would chose the right candidate that had the capacity to win the election.

Earlier, Atuma said his visit was to inform Kalu about his ambition to become the next Abia governor.

“I have come to receive your approval and support to continue the good work you started when you were  governor.  I’m prepared in spirit and conscience to contest and win.  I’m only seeking your approval, which is needed to ensure that the state is secure and given good direction and governance,” he said.

Atuma, who represented Ikwuano/Umuahia Federal Constituency from 1999 to 2003, described Kalu as the father of modern political order in Abia.

According  to him, the former governor established the political order currently maintained in the state.

He said that he had always admired Kalu’s political exploits and wanted to follow his footsteps.

“My admiration for you has also inspired me to desire to become Abia governor. This is to enable me to continue with the legacies you left behind in terms of infrastructure development,” Atuma said.

He commended Kalu for attracting massive infrastructure development to his constituency.

“It is only in Abia North that you have developmental projects going on today in the entire state,” he said.

He hoped that APC would take over the state to be able to replicate similar developmental stride in the entire state.

“Abia is now standing on a good pedestal today, having been connected to the centre and we should remain connected to be able to take the state to the next level,” Atuma said.

He was accompanied on the visit by chieftains of the party in the state, including a former Minority Leader in the  House of Assembly, Chief Chidi Nwosu.