HomePolitics2023: Imposition will lead to political war in Ebonyi-APC chieftain - By...
FeaturedPolitics

2023: Imposition will lead to political war in Ebonyi-APC chieftain – By -Reginald Okoro 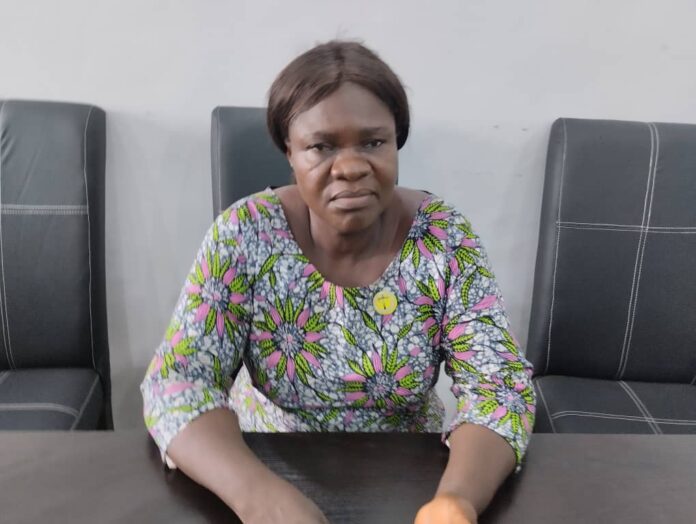 Mrs Beatrice Nkwuda, former Special Adviser on Primary Education to former Gov. Martin Elechi and a Chieftain of the APC in Ebonyi

Mrs Beatrice Nkwuda, a chieftain of the All Progressives Congress (APC) has described the endorsement of Mr Francis Nwifuru by Gov. Dave Umahi as an imposition, saying that such action could lead to political war in Ebonyi.

Mr Fran
Nkwuda, former Special Adviser to Chief Martin Elechi, the former governor of Ebonyi stated this at a press conference on Thursday in Abakaliki.
The chieftain, who was the immediate past Zonal Women Leader, Ebonyi Central senatorial District was reacting to the recent controversial endorsement of Nwifuru, the sacked Speaker of Ebonyi House of Assembly and one of the gubernatorial aspirants.

Nkwuda regretted that Ebonyi had been embroiled in communal and inter-communal rivalries that had led to killings and destruction of property arguing that the purported endorsement could spark of politically motivated killings and war.
She said that the unilateral endorsement was a shock to members of the party who were still awaiting submission of report of the zoning committee set up to harmonise how key elective positions would be zoned.
“With the endorsement, the governor has shut up the political space against other aspirants.

“Women in particular who have always believed in what he said that he is not going to interfere in the process of selecting who aucceeds him, that he is going to be neutral; and that he is going to allow everybody to participate in the election.
“But, with the announcement, he has heated up the polity and the endorsement has generated negative reactions and condemnation in every part of the state.
“Every junction, every eatery that you go, people talk about it with anger because people are worried.

“We are tired of war here and there in the state; we have communal wars and conflicts in various parts of the state and now he wants to trigger a political war with the endorsement.
“I know Ebonyi people do not want war and we don’t want it and we will Keep saying we don’t want war,” Nkwuda said.

She explained that endorsement of an aspirant in APC as ‘annointed’ candidate was not only underdemocratic but ran foul of the party’s constitution.
“APC is a party that believes in everybody show your interest; show how popular you are, but now the governor wants to close up the space.
“We are shouting it even form the rooftops that we do not believe in his pronouncement, that whoever wants to contest for that position of governor as far as the person is qualified and that he or she is Ebonyi indigene is free to contest.

“The governor should show maturity in the game of politics and governance, one man cannot close up the ambition of Ebonyi people” she said.
She called on Umahi to publicly withdraw the statement, maintain neutrality and allow a level playing field for all the aspirants to test their popularity.
“APC believes in direct and indirect primaries for selection of candidates. The party also believes in concensus option.”
Nkwuda urged all the other governorship aspirants in the party not to be intimidated nor be deterred by the endorsement saga in pursuing their aspirations. END//