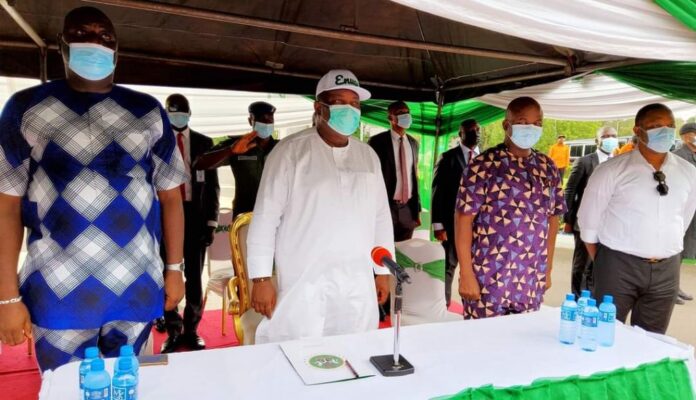 Gov. Ugwuanyi (2nd left) flanked by officials during the visit

Gov. Ifeanyi Ugwuanyi of Enugu State has lauded  Achi people for handling and pursuing their quest for the Aninri/Awgu/Oji River Federal House of Representative seat with maturity and decorum.

Ugwuanyi said this while addressing Achi people when they paid a solidarity visit to him at the Government House to discuss germane political issues affecting the entire Achi people.

The governor, who said that their quest to have a shot at the Aninri/Awgu/Oji River Federal House of Representative seat was not out of place, assured the people that his government stands for equity and fairness to all.

“I must laud the great Achi people for carrying yourselves in a very decorous manner in their quest. I must confess to you that your approach is very commendable.

“I personally acknowledge the merit of your case and advise you people to quickly call a meeting of the larger Oji River council area to close ranks on their positions.

“Thereafter, also reach out to the community and political leaders in the other two council areas of Awgu and Aninri.

“I sincerely believe that with wider consultation and engagement; equity and fairness will definitely suffice when the matter will be concluded and that you people’s concerns would not be jettisoned”.

Earlier, the convener of Achi Political Dialogue Group, Chief Maxi Okwu, took the governor down memory lane on how the council area was founded and how the component communities had existed peacefully both politically and socially.

He noted that no Achi person had ever occupied the Aninri/Awgu/Oji River Federal House of Representative position but rather Achi had supported other people to the said position.

According to him, Chief Uche Ekwe, and Chief Toby Okechukwu (the incumbent) both from Awgu went two and three consecutive terms respectively.

“On the other hand, Senator Ike Ekweremadu has been at the senate for five record terms.

“It was only fair that the two council areas should support the Oji River this time around.

“Dr Okey Ibeabuchi from Achi showed very keen interest in the last election but Okechukwu was allowed to go another term, his current and third terms.

“In 1993, Hon Obi Madueke, was at the green chambers (Federal House of Representative), while Hon KGB Oguakwa, went for two terms from 2003 to 2011, both of them are from Zone B in Oji River council area.

“Chief Nwandison from Zone C (Ugwuoba) was also there in 1979 leaving Achi with none at all”.

Contributing, Chief Chidi Akagwolu, President-General of Agbadala-ala-Achi Autonomous Community, who spoke on behalf of all the President-Generals in Achi town, extolled the governor for the way he had handled political issues in the state.

According to Akagwolu, Gov. Ugwuanyi’s sterling manner of handling of political issues in the state has ensured peaceful coexistence among communities.

He observed that the manner the governor redressed injustices during the last council elections was first of its kind and helped to assuage all disgruntled parties .

“I plead with our amiable governor to use the same brush to paint this issue of the House of Representatives as it concerns Aninri/Awgu/Oji River Federal Constituency,” he said.

During the visit, Gov. Ugwuanyi cleared the question of the status of the newly created zones put forward by the Administrator Oji River East Development Area, Hon O.G.B. Onuaguluchi.

The governor categorically stated that the government had done the needful, that the new zone/development area was a law, and it was left for the people to operationalise it . This received a loud ovation from the crowd.

At the end of the parley, an obviously satisfied Achi people went home joyously while praising the governor for his democratic ideals and his ever willingness to sit down with agitating populations in the state.

It would be recalled that Achi community has seven wards plus two in Oji Urban making it nine, out of a total of 20 wards in Oji River council area.

This made the community the dominant population and the largest voting demographic in the Oji River council area.