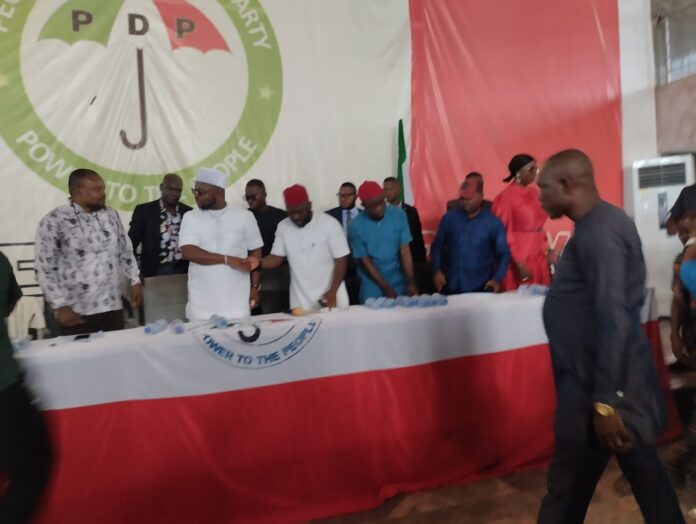 Chief Ifeanyichukwu Odi, a governorship aspirant in the platform of the People’s Democratic Party (PDP) has promised to prioritise the Ebonyi Civil Service system to make it more productive and service-oriented if elected governor in 2023.

Odi stated this on Monday in Abakaliki while fielding questions to newsmen after consulting with the leadership of the party on his governorship ambition at the PDP state Secretariat in Abakaliki.

The aspirant said that repositioning the civil service entailed embarking on strategic reforms and putting more money in the hands of the civil servants who according to him are the engine house of any administration through wealth creation.

He said that his commitment would be to lift the state and its people from poverty adding that Ebonyi workers
were integral part of the population to lift out of poverty.

“When you create wealth for the people, it will revolve around every other sector in the state including the civil service and our civil servants shall benefit,” Odi said.

Odi, a business mogul said that he was motivated to join the Ebonyi governorship race because of his strong desire to offer himself for the serve of the people.

He said that during his declaration speech recently at Isuachara, in Isu, Onicha local government area that he was emphatic about knowing the challenges of the state and solutions.

According to him, the declaration speech was titled, ‘I know my people and my people me’ which implied that I was not new to plights and challenges confronting the state and its people.

He said that the declaration speech captured all that he has been doing over the years including his philanthropic gestures and what he intended to do for the people if given the opportunity to lead the state.

He said: “What the speech translates is that it talked about what I have been doing over the years.

” I mentioned again check the pedigree and antecedent and what that suggests is that one person who has actually founded a foundation which has impacted meaningfully to my people .

“You are not unaware of my philanthropic gestures that has to do with building shelters to over 135 people in Ebonyi.

“You are also not unaware about our scholarship scheme that has given scholarships to about 200 scholarships and also start-up capitals we gave to Ebonyi indigenes.

“If we have the opportunity to be at the helm of leadership as the governor, it means that I will have more capacity to access more funds and we’ll channel the funds to areas we will have more meaningful development,” Odi said.

Meanwhile, Mr Silas Onu, PDP state chairman has assured a level playing field for all aspirants contesting the governorship ticket of the PDP.
He said that the agenda of the leadership was to provide a fair and credible platform for all the aspirants to compete and represent the party.

“It will be an exercise in futility if we gather people to deceive ourselves that we cannot win an election; our job is to make sure that we present best aspirants that delegates want that will win in election and present them to the people.

“It doesn’t matter the side where you come from, what matters is your winning ability,” Onu said. END//