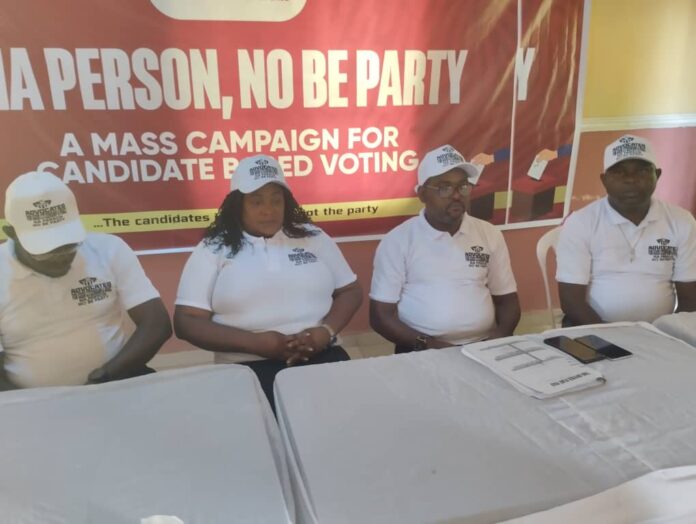 The group made the call at a press conference on Tuesday in Abakaliki.In a speech delivered by Chief Kelechi Mbam, its national coordinator, the group said that it was committed to the enthronement of good governance and was therefore leading a campaign aimed at sensitising the voting public on how to exercise their franchise wisely.

The group said that placing political parties above individuals’ pedigree and credibility in elections was becoming worrisome and overwhelming in the voting partern in Nigeria.”It is on this backdrop that we have decided to launch a campaign for candidate based voting tagged, ‘Na person; no be party’ to drum up awareness.”The issue of placing political parties above individual pedigree is becoming overwhelming in our voting partern; this cancker worm if unchecked is capable of continuous enthronement of bad leaders in our polity.

“A situation where a credible candidate fails on an election because he contested under a perceived smaller party has continued to deal with us negatively. “While on the other hand, where an uncredible candidate emerges from a majority political party, there is no barrier for such a candidate to enjoy maximum support of his or her people.

“The campaign designed to target the electorate both in urban and rural areas across Ebonyi in particular and Nigeria in general.”And most importantly, to alert various political parties on the need to consider credibility, acceptability and marketability as a sine qua non to nomination of candidates for various elective positions,” the group said.

The organisation stressed that the advocacy and sensitisation campaign it embarked was a long term project that required continuous efforts greased by unity of purpose of its promoters.”Our organisation is committed to ensuring that the legacies and aspirations of our founding fathers shall not be in vain.

“We have articulated and compressed our advocacy, sensitisation and enlightenment programmes into; press conferences, 1-to-1-to millions reach out , radio live programmes, reflection on candidates, sign a pact, online public voting and publication of result.”Others include; state the reason, research and public verdict among others,” the group said.

The organisation explained that the advocacy campaign had become necessary because political parties of today has abandoned the art of presentation,promotion and implementation of party manifesto. “The ideal practice is that candidates of political parties anchor on their party manifestoes while canvassing for votes and to derive their administrative policy from the party manifesto. “Unfortunately, and most regrettably, what is obtainable today,is individual aspirants or candidates presenting their own manifestoes.

“The logic therefore is, since parties no longer pursue party manifesto, it is no longer necessary for voters to consider political party in their choice of vote.”Rather, they should look at the persons one after the other and vote them according to their individual pedigree and manifesto irrespective of party leaning,” the group said.The group also canvassed for the inclusion of independent candidature in the constitition in next constitutional amendment or alteration to allow individuals run elections without necessarily using political parties as platform.