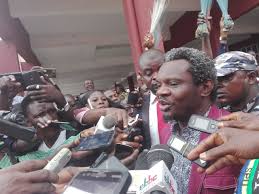 Mr Chinedu Ogah, representing Ikwo/Ezza South Federal Constituency has promised to site one constituency peoject in each of the 20 wards of the Ikwo local government area (LGA) of Ebonyi.

Ogah stated this on Wednesday in Abakaliki when he received members of the Ikwo Legislative Council who paid him a courtesy call at his Abakaliki residence.He said the proposed projects would be in recognition of the contributions of the lawmakers’ leadership role in development of the council and the state in general.

“Being a member of the House of Representatives, I must assure them that I must site one project each across the 20 wards in our LGA.”This is in addition to the projects we have already sited; the new projects are going to be sited courtesy of the councillors and they are going to be the ones to drive it.”I will give them three weeks to bring proposals on the type of project needed and where it will be sited; they are our leaders and we need to make them happy for them to reach out.

“They are being disturbed by the masses that elected them; every morning people come demanding for hospital bills and making one demand or the other, so, we need to make them happy,” Ogah said.Meanwhile, the 20 ward wouncilors said they have endorsed Mr Francis Nwifuru, Speaker of Ebonyi State House of Assembly, for 2023 governorship position in the state as their preferred aspirant.

The councilors also endorsed Ogah for second term and Chief Ken Eze, chairman of Ezza South LGA for the Ebonyi Central Senatorial Zone and other aspirants of the All Progressives Congress (APC) endorsed by Gov. Dave Umahi.Earlier, Mr John Nwoba of Ndufu Amagu Ward 2 who led the councilors on the visit, vowed to ensure that all the aspirants endorsed by the governor emerge victorious at the 2023 general elections.“We are supporting all the aspirants the governor has endorsed for 2023 general election especially those from Ebonyi Central senatorial zone.

See also  "We shall not be deterred by the machinations of political charlatans," says Anyichuks Campaign Organisation

“We also support endorsement of the member representing Ikwo/Ezza South Federal Constituency in the House of Representatives, Mr Chinedu Ogah and the chairman of Ezza South Local government Area, Chief Ken Eze.“We have also endorsed the Speaker of Ebonyi State House of Assembly, Chief Francis Nwifuru for the governorship position. “We believe that these aspirants have all it takes to represent us at various levels of governance having been tested and trusted.“We want to make it categorically clear that wherever the governor is going is where we are going because he knows the best for us,” he said.Mr Eze Chikwado said they would go all out to mobilise for the victory of the aspirants during the APC Congress and the general election.“We are grassroots mobilisers, we are not going back; not even because we have endorsed you, we have to go and do the work at the grassroots and we will deliver our wards to all the aspirants we have endorsed,” he said.