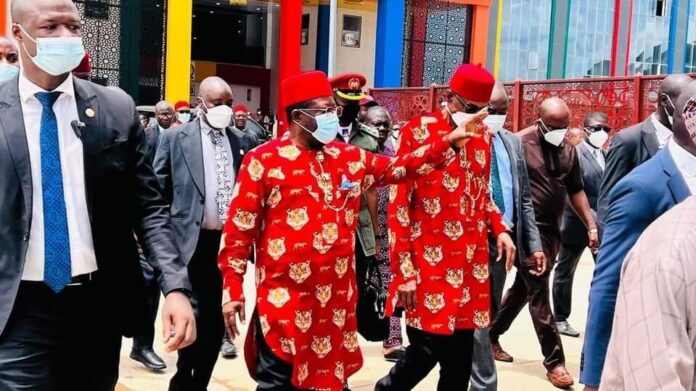 South-East leaders came out from a meeting with President Muhammadu Buhari, in Abakaliki, the Ebonyi State capital,  wearing heavy faces following the refusal of the president to order the release of the leader of the Indigenous People of Biafra (IPOB), Mazi Nnamdi Kanu.

Recall that the IPOB leader is currently facing charges bordering on treasonable felony at the Federal High Court, Abuja, , and has for severeal months been detained in the Department of State Services facility in the Federal Capital Territory (FCT).

The Imeobi Ohaneze Ndigbo World wide, the apex Igbo socio-cultural organisation,  had at its meeting in Enugu on Thursday said that the release of the IPOB leader, Nnamdi Kalu will restore peace and security in the South-East

In a communique read to  journalists by the Secretary General of Ohaneze Ndigbo Ambassador Okay Emuchay after the Ohanaeze ‘Imeobi’ meeting in Enugu, the organisation resolved to send a delegation to meet President Buhari in Ebonyi, who is in the state on a two-day visit, to pleade with him to release the IPOB leader.

SummitNews learnt that President Buhari at the meeting  held at the New Government House in Abakaliki, told South-East leaders that the court will determine the fate of the IPOB leader.

The Igbo leaders in an address during the meeting pleaded with Buhari to relaease Kanu and all  Igbo youths in detention across the country, a plea which the president reportedly spurned.

The release of IPOB leader Nnamdi Kanu and the issue of Igbo presidency topped the agenda of  Thursday’s Imeobi meeting in Enugu, the Enugu state capital.

The Igbo leaders after the Ohaneze Imeobi meeting moved to Abakaliki, the Ebonyi State capital to meet with President Muhammadu Buhari.

Buhari, who arrived Akanu Ibiam International Airport Enugu on Thursday, is in Ebonyi for a two-day working visit.

One of the participants in the meeting and former senator told journalists in confidence that the selected leaders would meet the president at dinner in Abakaliki to discuss the issues.

However, Ohanaeze condemned the worsening security situation in the Southeast and call on all Igbos to put all hands on desk to halt the situation.

The communiqué insisted that that the release of Mazi Nnamdi Kanu and other Igbo youths in detention is the first crucial step towards restoring peace and security in the Southeast.

The communiqué read thus: “That Imeobi congratulates the current National Executive Committee (NEC) of Ohanaeze Ndigbo which emerged through the January 10, 2021 election held at Dan Anyiam Stadium, Owerri, and also commends the efforts of the Ohanaeze leadership in steering the ship even in these trying times.

support, which they have earned and deserved. Imeobi also calls on those aggrieved with the outcome of the election to lend their support to the current Leadership of Ohanaeze Ndigbo.

“That there is need to redouble our efforts towards the ongoing voters registration exercise by sensitizing our people on the importance of the exercise and getting their PVCs where they reside.

“Ohanaeze strongly believes that the release of Mazi Nnamdi Kanu and other Igbo youths in detention is the first crucial step towards restoring peace and security in the South-East. We are convinced that the Nnamdi Kanu issue can only be resolved through dialogue.

“Ndigbo are irrevocably committed to a Nigerian President from the South-East Zone in 2023.

“That Imeobi Ohanaeze hereby empowers the President-General to

constitute the Political Action Committee amongst others that will achieve the desired results in all the issued raised at the Imeobi.

“That the President-General Amb. Prof. George Obiozor and the Secretary-General, Amb. Okey Emuchay, MFR or their authorized spokesman; are the only officials authorized by the Imeobi to issuestatements on behalf of Ohanaeze Ndigbo Worldwide.”