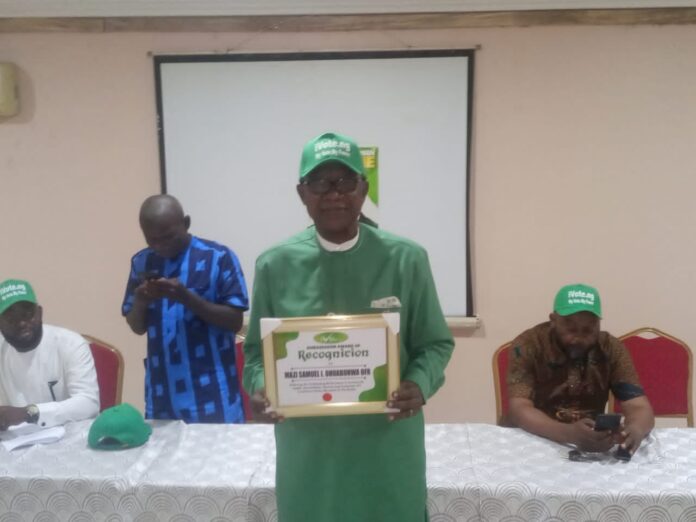 Mazi Sam Ohuabunwa, presidential aspirant on the platform of the People’s Democratic Party (PDP) says that Nigeria will be better again once the people elect good leaders to oversee the affairs of the state.

The presidential hopeful stated this in a statement released by the Ohuabunwa Campaign Organisation a copy was made available to newsmen on Wednesday in Abakaliki.According to the statement, the presidential aspirant spoke at Enugu on Tuesday while being conferred with the iVote.ng’s Ambassador of Recognition Award.

Ohuabunwa stated that the country had brighter chances of becoming great again among the comity of nations urging Nigerian citizens to make wise decision in chosen the next crop of leaders in 2023.”Nigeria will become a better country the day its citizens elect good leaders.

The day we begin to be bold to tell our leaders they are not doing well and speak truth to power, this country will be better,” Ohuabunwa stated.He commended the organisers of the award noting that the recognition was a call to responsible citizenship. “I’m grateful to iVote.ng for the award. I want to congratulate you and all those who were in Enugu to witness the award.

“This is calling on us to responsible citizenship and that’s what it entails.”I didn’t know there was going to be any award for me in Enugu at all. I went there to talk to delegates and delegates influencers for the forthcoming presidential primaries of the PDP to support our bid to the office of the President of Nigeria.

“We are happy that this award has come alongside this consultation process in Enugu; people do travel to far places to receive awards, without knowing their values. But, I went to Enugu and the award came. “For me, the award is good, because it’s talking about civil responsibility; it’s speaking about how to motivate our people to vote. It’s speaking about how to monitor our votes and ensure there is integrity in the democratic process especially as we head to 2023,” he added.

Earlier, the organisation said that Ohuabunwa was recognised by the online voting and voters education app Project due to his outstanding performance in community health, humanitarian services and continuous determination for a better Nigeria.

The statement noted that Mr Onyebuchi Mbah, president of iVote.ng said that the organisation was a Non Governmental Organisation (NGO) poised to bring a paradigm shift in Nigerian politics.The statement quoted Mbah as saying: “We in ivote.ng, we are an NGO, we are into continuous voters’ education, information dissemination and mobilisation of eligible Nigerian electorate.

“We are non-partisan. And so, we believe that if the right and patriotic citizens of Nigeria are elected into government, virtually all problems and challenges of this country will be tackled. “And as part of achieving this, we are ensuring that voters are continuously educated, mobilised before and during elections.

“Therefore, we have found that Mazi Sam Ohuabunwa is one of the few patriotic Nigerians, that have distinguished themselves for the service of humanity, hence this Ambassador of Recognition Award, from all of us here at iVote.ng.” He deserves the award and we wish him well in all his endeavours.”The award is in recognition of his outstanding performance in community health, humanitarian services and continuous determination for a better Nigeria.