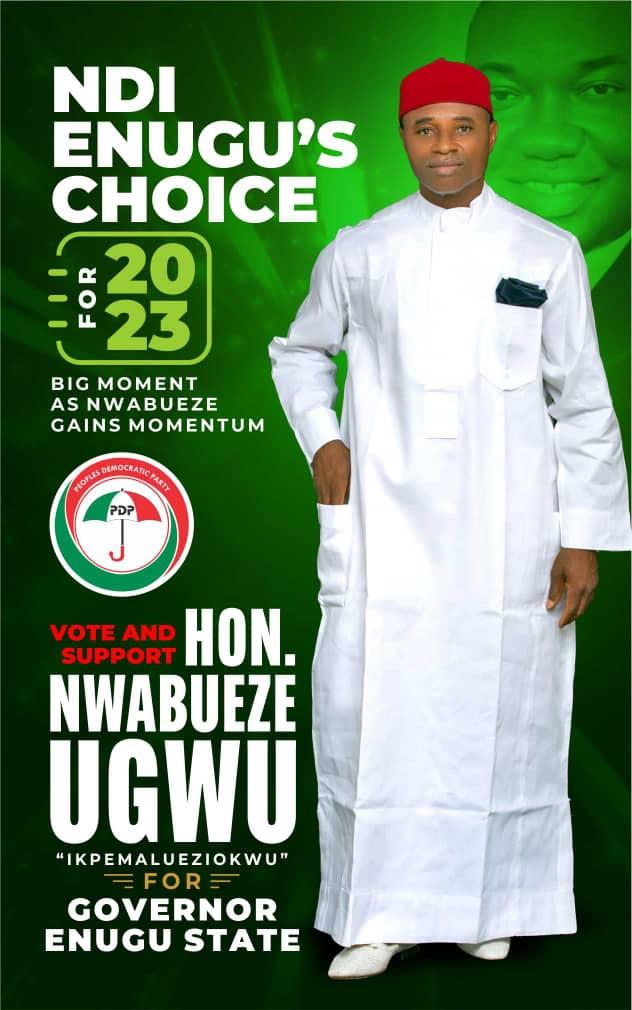 A front line gubernatorial aspirant in Enugu State on the platform of the Peoples Democratic Party (PDP), Hon. Nwabueze Ugwu, has pledged to  fast-track the state’s economic growth through agricultural and industrial transformation if he succeeds the incumbent Governor Ifeanyi Ugwuanyi, on May 29, 2023.

Addressing journalists in Enugu ahead of the upcoming  PDP governorship primaries slated for May 25, 2022, Hon. Nwabueze, an Enugu-based legal practitioner, and former member, Enugu State House of Assembly, promised that the PDP administration under his watch will reenact the economic growth miracle of late Dr. Michael Okpara era in the erstwhile Eastern Region through deliberate combination  of agricultural and industrial revolution; incorporating technology and innovation that would leapfrog the state “from the present level of underdevelopment to an industrialized state.”

Hon. Ugwu  who used the occasion to unveil a17-point agenda encapsulated in a document christened ‘Manifesto For A Greater Enugu,’ to members of the Fourth Estate of the Realm, promised to bring his vast exposure to politics and public service as well as his wealth of experience as a distinguished legislator to bear in his quest to transform the state to  greater heights.

“I have served in the legislature,not just as a lawmaker, but as a member of that hallowed first branch of government.The legislature is the epicenter  pivot, hubris, the engine room ,and the citizens true representative in a democracy.

“With its oversight functions,the legislature ensures checks and balances in a democracy so that the elected office holder does not transform to a despot;and by extension ensures that the judiciary has applicable laws to adjudicate on.”

He listed and x-rayed the 17-point agenda of his ‘Manifesto For A Greater Enugu’  under the following thematic areas; Agricultural Revolution, Minerals and Industrial, Education, Manpower and Technical Development,Urban,Rural and Regional Development,Security,Works and Infrastructure,Revenue Generation,Health Care Delivery and South Economic Agenda.

Pledging his strong commitment and patriotic zeal in delivering the  goods,he solicited  the peoples support and mandate.

“To achieve all these,I beseech you to give me your mandate.The power  in the mandate I seek  is the one to do good to all manner of persons living in Enugu state through proper and accountable use of our Commonwealth and goodwill to achieve common good,with zero tolerance for graft and official corruption…

“I grew up with and have become ingrained with the idea and moral direction of due process,I know no other option.It is heart warming many on both sides of the divide can attest to this…Once again,I know no other way of doing things except leaving my foot prints on the sands of time.Most importantly.

“I have a burning passion and patriotic zeal to advance our state to one of the fastest growing and buoyant economies globally. With your support,I will have no other option than to deliver the goods because Enugu Deserves the Best”,

He enjoined the people of the state to partner him in advancing the state.

” I equally enjoin and greet all true lovers of Enugu to partner us in this resolve to redeem our state and launch it on a pedestal of advancement. To my dear political associates and colleagues who share this mutual vision of enthroning a better Enugu state of our dreams,I raise my hands of camaraderie in welcoming you on board.

“I bring good tidings to the workforce of Enugu state as well as  the civil society and entire organized labour,I salute you.Aluta continua,victoria acerta.

“To the people of Enugu state,and by this I mean all lovers of our Coal City and indeed every person living in Enugu, our glorious tomorrow reminiscent of the former Eastern Nigeria is here..Together,we will excel because Enugu deserves the best” he declared amidst a thunderous standing ovation.

Responding to questions from the  newsmen, he explained that he was not just restating what has been said before now by past seekers of office, but that he was stating a  well thought out and researched programme which he had painstakingly  articulated in the past ten years and which he  hopes to achieve to the letter via a public -private partnership that would driven by his government.

He also reassured the audience of his resolve of not only  revitalizing ailing and abandoned industries but to optimally industrialize the state using PPP option.

He disclosed that problem of water supply in the state was hinged on security of equipment and reticulation and pledged to address same within the first six months of his government.

On the lofty scope of his manifesto and the prospect of realizing it,Hon Ugwu said that he would empanel expert discussion on all various thematic areas under discuss with a view to putting in extra efforts geared at achieving all.”Those who know me,know that in my office,I work hard.I am a lawyer and I work extra hours.When I become the governor,,I will definitely work harder in order to achieve my objectives in double quick time.

“I have a duty onto myself to leave a legacy and make a name for my self so that many decades after I have left office,Ndi Enugu would be wishing to have me back”