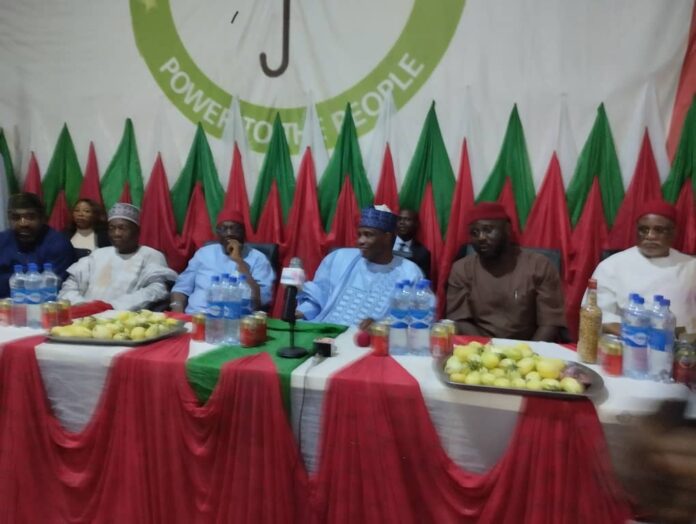 Gov. Aminu Tambuwal of Sokoto state and Presidential aspirant on the platform of the People’s Democratic Party (PDP) has called for unity and oneness PDP as the party prepared for the 2023 general elections.

Tambuwal gave the advice on Saturday in Abakaliki while addressing party faithful, delegates and his supporters during a consultative visit to the party in Ebonyi ahead of the presidential primaries.

The aspirant noted that the party needed unity at every level of leadership especially at both state and national levels in order to defeat the ruling All Progressives Congress (APC) in the forthcoming general elections.

“By the grace of God, come May 29, 2023 PDP will be re-enacted in Ebonyi; PDP will takeover the Government House in Ebonyi and takeover the Villa (State House) in Abuja.

“We must nominate candidate that is credible, that has capacity and competence to win the election along with other leaders of our great party in Ebonyi and in Nigeria,” Tambuwal said.

The former Speaker of the House of Representatives also called on the party delegates to nominate a pan-Nigerian, a nationalist and someone who is electable to become the party’s presidential flagbearer in the 2023 election.

“You know that It’s important and by the grace of God, that you have a presidential candidate who along with other leaders of the party, members and people of goodwill from this country can win the presidency of Nigeria.

“When you give me the flag of our party, I have the capacity; I have the competence, I have the right character and temperament to provide leadership.

“Even in APC they know that once I emerge as the candidate of our great party, APC will collapse and we will win the election,” he added.

The presidential hopeful said that agriculture would be given a boost while the administration’s economic and social policies would address, youth unemployment, insecurity and lack of industrialisation.

He said that youths would be trained in requisite skills to ensure economic development and empowerment.

Earlier, Mr Silas Onu, state chairman of the party thanked the presidential aspirant for the visit to Ebonyi promising that by May 29, 2023 that PDP would takeover government House and Aso Rock Villa.

He said: “We are confident that this will happen because from the purchase of forms you will see where the momentum lies.

“In PDP we have 13 governorship aspirants but in the opposing party, I doubt if they are up to five that bought forms because there is no momentum there and people are not interested in what they are doing.

“People beg us everyday to put our acts together because they are hoping on PDP to redeem them from the present quagmire.

“Your Excellency, you’ll become the number one citizen of the country; if God lays His hands on you, no man can stop it.