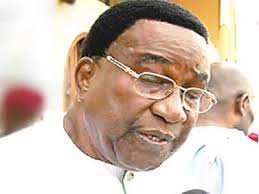 Former Governor of old Anambra State Senator Chief Jim Ifeanyichukwu Nwobodo, on Tuesday May 24, 2022, announced the selection of Barrister Dr. Peter Mbah,  as the right person to take over the mantle of leadership in Enugu State from the incumbent governor Ifeanyi Ugwuanyi, whose tenure expires on May 29, 2023.

The announcement comes less than 24 hours to the governorship primary of the ruling Peoples Democratic Party (PDP), in the state.  No fewer than 17 governorship aspirants are expected to participate in the primary scheduled to hold at the Nnamdi Azikiwe Stadium, Enugu.

Senator Nwobodo said Mbah, chairman/chief executive officer, Pinnacle Oil and Gas, was chosen after due consultations with the gubernatorial aspirants in the state on the platform of the PDP.

He said: “From my interaction with a number of them, I was looking for somebody who I think should redevelop Enugu State.

“As far back as October 2019, I invited Peter Mbah to my house. When he came, I told him to consider running for a position, especially Governor. He didn’t give me an answer immediately, but later he came and said he would consider running.

“Tomorrow, people will ask why am I keeping quiet, this is why I’m addressing the media today. I believe anybody who wins the primary tomorrow will be the Governor, because the PDP is the only party in Enugu State.

“I have also been speaking with the Governor of the State, a fine, peaceful gentleman, and I told him that anybody that will succeed him must bring peace.

“We need a Governor who will not go into any war, rascality or vandalism but peace. Anybody who wants to be the Governor must follow the same path.

“I have heard all kinds of rumours about people claiming they are sponsoring Peter Mbah, but he knows that I brought him into this race.” Nwobodo further disclosed that another aspirant, Senator Ike Ekweremadu has accepted to support Mbah.

He said he held a meeting with a number of the aspirants from Enugu East Senatorial District for a conversation on how to develop Enugu State.

He said:  “Ekweremadu has come to see me many times, and I told him about the need for peace, I have asked him to withdraw all cases in court so that we talk peace.

“We need peace in Enugu and that’s the legacy Ugwuanyi is leaving behind.

“I have asked Ekweremadu to collapse his team, let them join the rest in making Enugu to work.

“I want to thank Governor of the State for the way he has piloted the affairs of the State,” Nwobodo added.

But in a swift reaction,  Ekweremadu’s Ikeoha Campain Organization, asked the public to disregard Nwobodo’s claim that the former deputy president of the senate had thrown his weight behind Mba.

Nwobodo’s declaration followed months of speculations on who will succeed Governor Ugwuanyi  at the  expiration of his eight-year tenure.

Before now, PDP stakeholders in the state, including the gubernatorial aspirants, had given Governor Ugwuanyi the leeway to select his successor, and had capped such freedom with an assurance that whosoever he hand- picks would be supported by all to emerge as the next governor of the state.

But quite mysteriously, the governor has refrained from making any pronoucement about who succeeds him, even when speculations are rife that he is predisposed to anointing  Hon. Chijioke Edeoga, from Isiuzo council area as his successor.

Nevertheless, not a few say that the governor might have dumped Edeoga following alleged threats by several high-heeled politicians from Enugu East Senatorial zone –  where the governorship slot is zoned to –  to dump PDP if Edeoga, a former commissioner in Ugwuanyi’s cabinet, becomes the PDP flagbearer in the state.

The mood here is that Mbah, a product of University of East London, United Kingdom, from where he bagged  a Bachelor of Laws (LLB Honours), would emerge as the gubernatorial candidate of the PDP in Enugu state if there is no contrary announcement by Governor Ugwuanyi or any of his aides regarding his choice of a gubernatorial candidate.

Hon. Nwabueze Ugwu, one of the leading PDP gubernatorial aspirants in the state, doubts whether Senator Nwobodo read a script written by Governor Ugwuanyi.  Few hours to the contest, he is still hopeful that the governnor would make a pronouncement on his choice of a successor.

Some PDP stalwarts in Enugu who spoke to SummitNews on condition of anonymity suggested that the governor might have authorised Senator Nwobodo to unveil his successor as doing so himself would ruffle the unfavoured  gubernatorial aspirants – many of whom had hitherto demostrated absolute loyalty to the governor.

The endorsement of Mba comes on a day that a Federal High Court sitting in Abuja, dismissed Ekweremadu’s application urging the court to declare the list of delegates produced by a faction loyal to him as the authentic list to be used in all the primary elections in the state chapter of the PDP.

Meanwhile, Gov. Ugwuanyi has picked the PDP ticket to represent Enugu North Senatorial District in the upper legislative chamber in 2022.

He is billed to take over from Senator Chukwuka Utazi, who according to speculations,  has been penciled down as Mba’s deputy.

Against this backdrop, not a few say tomorrow’s PDP governorship primary in Enugu State, may be a mere formality – the winner already known and securely holding the key of Lion Building