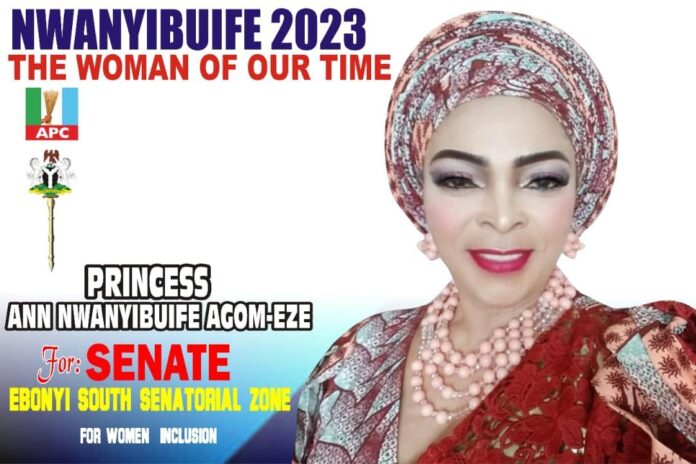 Mrs Ann Agom-Eze, a female senatorial aspirant on the platform of the All Progressives Congress (APC), Ebonyi chapter has urged the party to support the aspirations of female politicians in the party.

She said that plea was sequel to the appeal made by the Mrs Aisha Buhari, the wife of President Muhammadu Buhari on 35 per cent affairmative representation of women in elective positions in the 2023 general elections.
The aspirant made the call in an interview with our correspondent in Abakaliki on Friday.

The aspirant who urged the party to heed the request of the wife of the president said that if given the party’s nomination for the senate she would use it to increase women participation in elective position.

She said: “The wife of the president on her visit to the National Working Committee ( NWC) to the party’s secretariat recently urged the party to give support for more more representation in the electoral process.

“I’m here to re-echo this appeal and to ask that our party should offer more support for the actualisation of the aspirations of female politicians in 2023 election.”

She therefore called on the delegates to borrow from the Ebonyi North Senatorial district which had in the past elected a woman to represent the zone in the House of Representatives.

“If the zones can allow women to participate in the forthcoming party primaries for the national assembly elections why can’t we replicate same in Ebonyi South,” Agom-Eze said.

Agom-Eze, a former Permanent Secretary in the Ebonyi Ministry of Lands Survey and Housing promised to offer qualitative and credible representation if elected.

She further pledged to create the change that women were clamouring for as well enhance women participation in ​decision making.

She appealed to the delegates in the forthcoming party primary to cast their votes for her to emerge the party’s senatorial candidate in Ebonyi South.

She vowed to use her position as senator to fight for significant increase in women participation in politics saying that she had developed a blueprint to achieve the dream.

“My nomination will create significant increase for women participation in politics and help to harness the untapped capacity of women leadership.

“My nomination will represent merit orientated quota for women and men and also change the notion that politics is reputed for being dirty where illegality and unethical means are used to get to power.

“I will provide an unprecedented representation that has nerver been seen before in the zone and we will be happy; I know I can,” she said.

The aspirant assured that monies allocated for constituency projects would be judiciously utilised on the projects they were appropriated for.

“I will attract and utilise accordingly all funds allotted for constituency project for the overall development of our constituency,” she added.

She alleged that the youths, children and people living with disabilities who were being marginalised was due to low level of women representation in decision making process.

” I will ensure they are happy by creating a better life for them through empowerment and bringing their issues to the table.

“I will be both gender-sensitive and gender-responsive; I will be more disposed to giving priority to social concerns ​and to the relatively disadvantaged population group ​because the women are more socialised into more nurturing values,” she added.

She called on the party to eschew violence before, during and after the primary election while urging for a level playing field for all the aspirants.