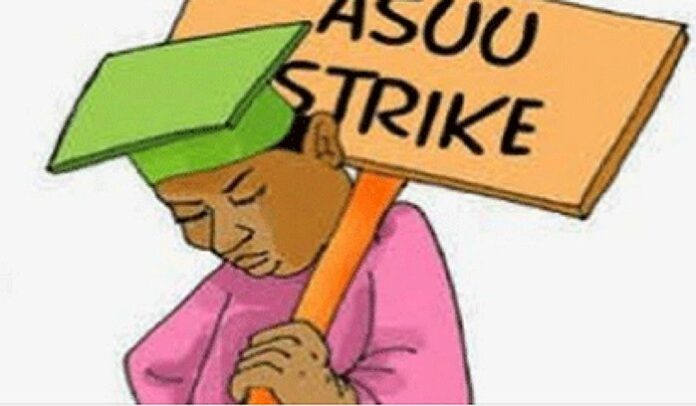 Dr Ikechuku Igwenyi, acting chairperson, Academic Staff Union of Universities (ASUU), Ebonyi State University (EBSU) branch has called on members to remain united and steadfast in the ongoing struggle.The advice is contained in an open letter to members of the EBSU chapter of the union, a copy was made available to newsmen on Tuesday in Abakaliki.

The Open Letter captioned: ‘INDEED, OUR DESTINY IS IN OUR HANDS’ admonished the striking lecturers to remain firm, strong and united adding that, ‘our union is a thinking union.’He added: ‘United we bargain, but divided we beg; forward ever; backwards never, we will sustain the tempo until we achieve better working condition.”The unionist while acknowledging the immense hardship and suffering members of the union were subjected to called on them not to give up on the struggle.

He said: ‘ I have this strong conviction that the tragedy of life is what dies in a man while he still lives.”We have kept mute in the face of a collapsing system either by default or deliberate attempt to destroy educational system in Ebonyi.”We need to speak up and let out the venom of truth to paralyse the oppressive activities of our leaders; children and staff are extorted openly and nobody as much as coughs about it.”Our system is grinding to a halt and we pally on as if nothing is wrong, unfortunately, some of us behave as if they have made up their minds to pack their luggage and exit with our visitor and his imposed appointees.

“It has been said that the best way to destroy a nation is not by use of bombs and missiles but by lowering the standard of education and buildings will collapse in the hands of engineers while patients die under the watch of medical officers and nurses.”People will be pitched against each other and chaos will be the order of the day. “Our leaders employ this mechanism and it portends disaster where people cannot read road signs; medical prescriptions, industrial safety rules or simple business documents.

“We have become proud and shamelessly raise our ugly heads high in the euphoria of successful sabotage of our union’s interest by doing the bits of our masters.”And, as a success story, graduate and processed students within two calendar years for four year Bachelors’ Degree programmes from our university.

“How can we be proud of destroying a generation of students and people when those who are supposed to protect them from this destructive brain-washing are some of us?”Let us make hay while the sun shines because it’s late when it’s late.”As the strike continues, the struggles of our union make us strong and our destiny is in our hands and we only win when we are united,” he said.Newsmen reports that public universities in Nigeria on February 14 embarked on nation-wide roll-over industrial action over failure of Federal Government to implement renegotiated agreement signed with the union in 2009.