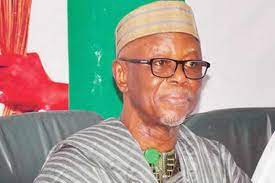 All the 23 presidential aspirants on the canopy of the ruling All Progressives Congress (APC), were cleared by the Chief John Odigie-Oyegun-led Presidential Screening Committee, to take part in the party’s forthcoming presidential primary election, SummitNews can now report.  And this is authentic.

This is contrary to reports in some traditional and social media to the effect that 13 out of the 23 presidential aspirants were cleared to contest the primary election, while 10 others were disqualified.

According to a source close to the Oyegun-led committee who spoke on condition of anonymity, none of the presidential aspirants was absolutely disqualified, having scaled the basic constitutional qualification, rather the committee advised all the aspirants who have pending criminal cases pending in court to drop their presidential ambitions.

The source explained that  if the APC presents a presidential candidate who has a criminal case hanging across his shoulders, the party stands  the risk of losing the election if for any reason the  court goes ahead to pronounce such candidate guilty before the election,

The source also said that a presidential aspirant like former governor of Imo State Senator Rochas Okorocha, who came straight from the DSS detention facility to be part of the screening exercise, was advised to reconsider his ambition to participate in the upcoming presidential primary election.

“Senator Okorocha met all the constitutional qualification, but he currently has a case in court bordering on fraud, and so the APC cannot give its presidential ticket to such an aspirant because you don’t know what the court may rule in the coming weeks and months,” the source said.

Recall that Senator Okorocha who represents Imo West Senatorial Zone in the upper legislative chamber, was arrainged in court some days ago by the Economic and Financial Crimes Commission (EFCC) for allegedly stealing N2.9 billion belonging to the Imo state government while he was governor of the state.

The source also said that former Minister of Transportation, Chibuike Rotimi Amaechi, was advised to drop his presidential ambition against the backdrop of his alleged misappropriation of about N93 billion belonging to the Rivers State Government while he was governor of the state.

Former presidential aspirant on the platform of the People’s Democratic Party (PDP), and Governor of Rivers State Governor Nyesom Wike, had said that Rivers elders and stakeholders would decide whether or not to prosecute Chibuike Amaechi.

“Supposing Amaechi becomes APC presidential flag bearer today, and the next day the Rivers State Government drag him to court, and the court pronounces him guilty, what will happen to the APC presidential ticket which he is holding,” the source queried.

However, Chief Odiegu- Odegun while presenting the report of the 7-man APC 2023 Presidential Screening Committee to the National Chairman of the party Senator Abdullahi Adamu, said that the quality of the aspirants were unquestionable, adding that the committee was surprised at the active participation of youthful members of the party.

It was apparently against this backdrop that Senator Adamu said on Saturday that  all the 23 presidential aspirants will contest the presidential primaries.

However, SummitNews learnt that if the proposal for a consensus presidential candidate fails, none of the aspirants adjudged unmarketable due to their alleged involvement in fraudulent activities, will get minimal votes during the voting process.

Chief Odiegu-Odegun said that the committee engaged the 23 presidential aspirants that appeared before it on issues of consensus.

He said this on Friday in Abuja, while submitting the 7-man committee report to the party`s National Chairman  Sen. Abdullahi Adamu.

“Our respected national chairman and other distinguished members of the National Working Committee(NWC), it is our pleasure to be here with you today to present our report to you.

“We had the privilege of being inaugurated by you on May 30, and we immediately started work same day, after a brief meeting.

“All the aspirants were engaged on the issue of consensus and it was a pleasant surprise that 98 to 99 per cent of them agreed that the party is supreme, that whatever it finally decides with proper consultations, would likely be accepted.

“Though one aspirant said that; yes I will accept consensus so long as it is settled on me.

“First, we had 23 presidential aspirants that we interacted with and my first comment is that we are indeed a very luck party,” Odigie-Oyegun said.

He added that though 23 presidential aspirants presented themselves for screening, there were other prominent Nigerians within and outside the country that applied but could not proceed with their applications.

He added that the committee was particularly surprised by the life accomplishment of the youths in the race, their understanding of the country`s situations and why they wanted to have the privilege of governing her.

“What was important was that they so believed in the country and the party that they were able to pay the sums they paid for its Expression of Interest and Nomination forms to participate in the process.

“So, I think the party ought to pat itself on the back for that,’’ Odigie-Oyegun who was a former national chairman of the APC and a former Edo governor, said.

He explained that the committee`s report was in two aspects; the basic constitutional qualification to aspire to be a president of the country, and the ability to lead and background of the aspirant.

He said all the aspirants had the constitutional basic requirements and were qualified in that regard, because it was basic and simple.

“But we are a governing party, and we are keying on continuing the process and replacing at the proper time, our president with yet another member of the party,” he said.

He said for this reason, the ability of the aspirants to lead, their background, experience and understanding of the Nigerian situation became critical.

He said their ideas on how difficult issues and problems could be addressed and how they could move the country forward also became a critical consideration at the screening.

“It is on that bases, that  we looked at who you are, what are you and what have you achieved.

“And the understanding of your mission and what you think you can do to move the country forward made our final list.

“I don’t want to read the names, I think we will leave that to you, but we have a short list which brought the number severely down to 13.

“We could have cut it a little shorter, but we wanted deliberately all the younger elements to surface,” Odigie-Oyegun said.

He said the idea was for the younger aspirants to be seen and noticed and handed over to the party’s leadership to decide who their preferred candidate would be for 2023 presidential election.

He said it was also an opportunity to showcase the kind of people that existed in the APC and within it, their youthfulness and the kind of experience they had.

This, he added, was for the world to know that the APC cared for the young and when it said the young shall aspire, it really meant it.

“This had been showcased in the report we have written.

“We only drew a word of caution that there is this cleavage that is gradually becoming centre stage in national discourse, between the North and the South and the presidency.

“And we just want to advise strongly that the party should please think of it in making its decision, address it and let it influence their thoughts because it has its own implications,” he stressed.

Odigie-Oyegun thanked the party`s leadership for the opportunity to serve in the committee, saying that though it was a sensitive and challenging assignment, it was an interesting one.

“We all profited from the assignment immensely and think the party will also profit,” he said.

He said the committee members were happy to take on the responsibility to do as much as they could do to make the work of the party lighter.