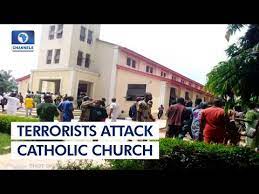 The Ijaw National Congress (INC) on Tuesday condemned the killing of innocent worshipers by gunmen at the Saint Francis Catholic Church in Owo, Ondo State, on Sunday.

Prof Benjamin Okaba, President of INC in a statement issued in Yenagoa, and made available to SummitNews,  commiserated with the people and government of Ondo state.

INC noted that the gruesome killing of worshippers in broad daylight, mostly women and children, by the blood-thirsty and depraved gunmen, signposts the intractable insecurity challenges facing the Nigerian state.

He said the unabating threat to lives and property in the country has continued to assume a more frightening dimension in geometrical proportions, putting the unity of the country at risk.

The Owo Massacre is callous, despicable, reprehensible and dastardly, which all sane people who value the sanctity of human life should condemn.

“The organised carnage in Owo has further exposed the parlous security architecture operated by the Federal Government. Citizens everywhere now live in trepidation as their safety can no longer be guaranteed by a government they elected.

The wanton killings in Owo have brought to the fore once more the need for a restructured Nigeria to give the constituent nationalities full autonomy over the protection of their lives and property and the management of their resources.

“This is the minimum that can guarantee the corporate existence of Nigeria, to avoid the growing agitations for secession. There is no doubt Nigeria is fast becoming a failed state.

“The leadership of the INC and the Ijaw people condole with Governor Rotimi Akeredolu, the government and good people of Ondo State and the Catholic Church over this dastardly mayhem.

“We also express our sympathy to the bereaved families of the victims and pray to Almighty God to comfort them while granting eternal repose to the souls of the departed.

“Giving the failed promises of the Federal Government to protect lives and property, we call on all Ijaw communities to be extra-vigilant and security conscious and take proactive steps to ensure that our bushes and environments are rid of unsuspecting miscreants and strange bedfellows in the name of engaging in mercantilism,” Okaba said.

INC also urged governors of the Niger Delta states to be alert and alive to their responsibilities in the wake of the unspeakable violent attack in Ondo State. Despite the ongoing frenzy of political activities for the 2023 general election.

He called on governors of the Niger Delta states to put their ears to the ground, to nip any such tendencies on the bud before explosion.

INC cautioned all communities and the Niger Delta in general to be extra-security conscious and be sensitive about the activities of intruders.