HomePoliticsCount us out of denigrating statement on Tinubu's election as APC Presidential...
Politics

Count us out of denigrating statement on Tinubu’s election as APC Presidential candidate, says Ohanaeze – From Ijeoma Eke-Ojim/Enugu 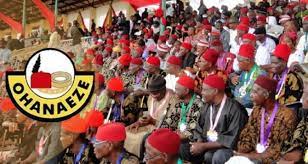 Ohanaeze Ndigbo Worldwide, the apex Igbo socio-cultural organisation has disassociated itself from a statement published in some sections of the media which described the election of  the Presidential candidate of All Progressives Congress (APC) Asiwaju Bola Ahmed Tinubu, as a “national calamity, considering the enormity of the baggage he is burdened with.”

The organisation in a statement signed by its National Publicity Secretary Dr.Chiedozie Alex Ogbonnia, insisted that the statement did not originate from Ohanaeze Ndigbo Worldwide, adding that “it has no hands in the content, context, comprehension and delivery of the unfounded statement.

The statement made available to SummitNews reads: “Ohanaeze read the message with sadness and views its contents as unfortunate, especially the attacks in that statement on the person and health status of Asiwaju Bola Ahmed Tinubu.

“The statement is very unfortunate, irresponsible, diversionary and most reprehensible. We had earlier stated that those behind such fake press releases are mischief makers, impostors, charlatans and unscrupulous social climbers who have shamelessly leeched on the invaluable footprints of Ohanaeze Ndigbo to issue press releases for narrow, perverse and illicit pecuniary interests.

“It is such unwholesome activities by some maladjusted, impish scaremongers that have been the bane of Igbo cohesion.

“For the avoidance of doubt, Ohanaeze has no personal issues with Asiwaju Bola Ahmed Tinubu to warrant the careless comments on his person although we certainly have issues with the current political arrangement and structure that appear to be an orchestrated policy to alienate, isolate, exclude, marginalize and frustrate Ndigbo in a country that bears eloquent testimonies of Igbo sweat, sacrifice, ambience and transformation.

“On the unfolding political developments in the country, we wish to inform all Nigerians and Ndigbo at home and in the Diaspora that Ohanaeze Ndigbo Worldwide led by Ambassador Professor George Obiozor is following the political developments very closely with keen interests and will make its position public at the appropriate time.”