2023: I’ll protect mandate given to me by the people-Sen. Ogba – By Paulinus Ogbonna 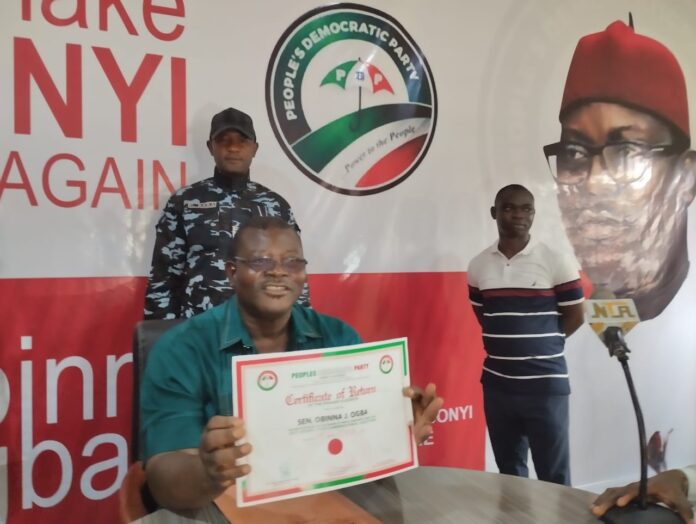 Sen. Obinna Ogba representing Ebonyi Central senatorial zone and governorship candidate of the People’s Democratic Party (PDP), Ebonyi state in the 2023 governorship election has vowed to protect the mandate given to him by the people.

Ogba made the pledge while addressing newsmen on Saturday at his campaign office in Abakaliki.He added that no amount of intimidation or threat from any quarter that would make him to either surrender or reliquish the mandate given to him by the party deligates during the rescheduled PDP primaries in Ebonyi held between June 4 and June 6.The senator noted that the Certificate of Return (CoR) issued to him by the party in Abuja was an affairmation that he remained the only authentic and recognised governorship candidate for the PDP in Ebonyi in 2023 gubernatorial election.

He congratulated the party leadership and the delegates who voted to entrust him with the party’s flag for the election saying that he was committed to taken the party to victory.He said: “One thing I know is that nobody no matter the circumstance can intimidate me or take away the mandate given to me by our great party from the backyard; it is not possible.

“No matter how they have ganged up, no matter who is sitting any where he is sitting I’m happy for our deligates who have spoken through their votes.”Twelve of the aspirants have extended their congratulations to us except one but, if in examination you scored 12 over 13, you have passed at distinction level.

“The guber candidate who also reacted to a Court judgement nullifying the primary elections that produced him as the PDP governorship candidate in Ebonyi called on his supporters, PDP faithful and Ebonyi people to remain calm.”Court is for everyone; it is for the rich and it is for the poor.

We are going to respond appropriately and we are going to defeat them the way we defeated them at the party poll,” Ogba added.Our correspondent recalls that Dr Ifeanyochukwu Odii was elected governorship candidate in a primary election held by a faction led by Mr Silas Onu on May 28 and May 29 which was boycotted by Ogba group.

However, following the cancellation of the PDP primaries in Ebonyi by the National Working Committee (NWC), the party ordered for fresh primaries in the state.Ogba emerged winner in the governorhip primary conducted under the supervision of Mr Tochukwu Okorie who was recently reinstated to his seat through an Appeal Court judgement delivered in Abuja.

Meanwhile, a Federal High Court in Abakaliki presided by Justice Fatun Riman on June 7 ruled that the primary elections that produced Ogba and other candidates were illegal, unconstitutional, null and void.

The Court also affirmed the primary elections earlier conducted in the state that produced Odii as governorship candidate of the PDP.

The Judge further ruled that PDP properly constituted a primary election committee and deployed them for the purpose of same and that INEC agreed to have monitored the election and returned candidates transparently.

The Court also held that any other primary elections held after those of May 28 and May 29 were null and void, conferring no benefits or rights whatsoever.