Chief Elias Mbam, governorhip candidate of the All Progressives Congress (APC) has petitioned the National Chairman, Alhaji Abdullahi Adamu over plot being hatched by the leadership of the party in Ebonyi to suspend from APC.

In a statement issued by Mr Obinna Udenwe, Chief Press Secretary to Mbam and made available to our reporter, the governorhip candidate appealed to the party’s national chairman to call some leaders of APC to order to stem creating loopholes that could lead to failures of the party in 2023 elections in Ebonyi.

“We wish to draw the attention of the national leadership of the party led by Sen. Abdullahi Adamu to the uncouth and unguarded behaviour of the leadership of APC in Ebonyi and requests him to call them to order.

“Our attention has also been drawn to documents being prepared by Chief Stanley Okoro Emegha, the state chairman of the APC, using one Mr Christopher Unachi of Ngbo Agbaja Ward and seven others meant for the purpose of allegedly suspending and expelling Mbam from the party. 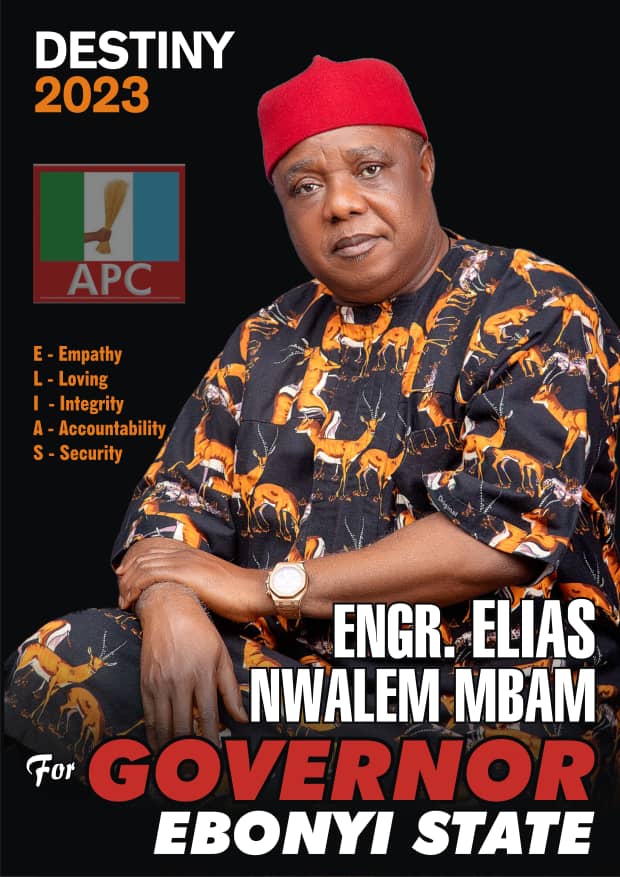 “The document claims to have investigated Mbam for misconduct against the party and to have found him guilty of some trumped up charges and allegations.

“This is despite the fact that the Federal High Court in Abakaliki on Tuesday, June 7, 2022 in suit number FHC/AI/CS/93/2022 gave an order restraining Chief Stanley Okoro Emegha and Christopher Unachi from going ahead with any planned suspension or expulsion of Mbam.

“Or ratifying any suspension or expulsion pending the hearing and determination of the substantive suit, and that the order was duly served on Chief Stanley Okoro Emegha and Mr Christopher Unachi.

“We have learned that this document being prepared is to be backdated to read June 6, 2022.

“You will recall that on May 30, 2022, through a press release, we drew the attention of the public to the plans being hatched then to initiate a suspension of Chief Elias Mbam from the party.

“We therefore notify the general public, supporters of Mbam and all APC faithful to be aware of the shenanigans being orchestrated by the above mentioned individuals.

” We draw the attention of security agencies to this atrocious act, which is capable of causing a breach of the peace in Ebonyi state.

“We call on Chief Stanley Okoro Emegha to know that Mbam will not be deterred by efforts geared towards bringing the APC to ridicule in Ebonyi State.

“He should be aware that the opposition parties are watching with keen interest and will surely take advantage of this to work against the party in the upcoming elections,” the statement read.

Our correspondent recalls that Emegha had on May 30 while responding to questions on the alleged suspension of Mbam affairmed the Mgbo-Agbaja ward had already suspended the APC governorship candidate while stating that the suspension would be ratified by state leadership.

“The ward has already suspended him. We are going to expel him from the party and sue him to pay a fine of two billion naira for going against party’s decision by conducting a parallel congress,” Emegha said.