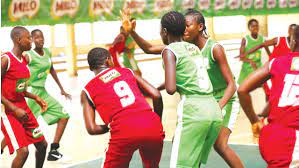 The team defeated their Enugu counterpart 43-42 to win the competition.

The champions reached the final stage after beating Abia 35-33, while Enugu overpowered Anambra 33-26 in the four-day Competition.

Speaking with Sports Writers after the final match,  Joseph Ogbonna, the Imo Captain, said his team mates were excited to win “the madien edition of the South East Basketball Tournament.

According to him, “the tournament is a stepping stone for many of us as it has provided us the opportunity of showcasing our talents in the sport.

He, however, appealed to the Federal Government to save Nigerian basketballers from the embarrassment caused by their suspension from international competitions for two years.

“Nobody is happy about the suspension of Basketball from international competition at the time the game is fast growing.

Also speaking, Secretary, South East Basketball Association, Mr. Osondu Ngwude, who expressed satisfaction with the conduct of the boys during the competition, said the Association has decided to host the tournament in different states of South East Nigeria.

The Ace broadcaster, disclosed  that Abia may likely  host the next edition of the tournament, adding that the next competition could be more organised than the just-concluded edition.

Coach of the Imo side, Mrs. Nkwocha Joyce, in her expression said she is happy and elated that her team  conquered  the host in the most exciting game of the competition.

She said it was a fight to finish, noting that her zeal for the game spurred the team.

“It’s God, because the games have been tough. We beat Abia  to qualify for the final. I know It was a hard game for us against the host because they have everything going for them the fans and an excellent team.

“We didn’t allow them to shoot on our heads today we stopped them from shooting three points.They couldn’t rebound.

“I have a great zeal for basketball. Kudos to my husband, because if he had say no, I wouldn’t have been here.

“It was a fight to finish against team Enugu where we conquered” the young female Coach stated .

African Examiner Sports reports that the four days competition was part of the developmental programs outlined by the South-East Basketball Association (SEBA) towards developing the game at the grassroots.

Meanwhile, the Imo State  Commissioner for Youth and Sports, Hon. Dan Ogu, has eulogised the team  for their triumph, saying  basketball in the state is gradually coming into limelight owing to the giant strides of the chairman of the association in the state, Mr Kelechi Anosike, to develop the game in the region.