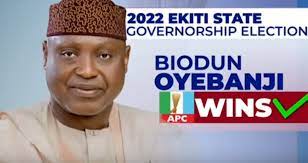 The Independent National Electoral Commission (INEC) has announced Biodun Oyebanji, candidate of the All Progressives Congress (APC), in the just concluded Ekiti State governorship election, as the winner.

The Returning Officer for the election, Prof. Kayode Adebowale, who is the Vice-Chancellor of the University of Ibadan, announced the results in the early hours of Sunday.

“Oyebanji, having scored the highest number of votes is hereby declared the winner and returned elected as the governor-elect of Ekiti State,” Adebowale declared.

Oyebanji, a former Secretary to the State Government (SSG), is now set to replace the incumbent governor, Kayode Fayemi, in October.

The agent of SDP, Owoseeni Ajayi, however, refused to sign the forms for the votes cast, while the agent of the Action Democratic Party (ADP) said: “Instead of having polling centres, what we have in Ekiti are vote-buying centres.”

The election, which was marred with reports of vote-buying and violence, was rated peaceful and independent by observers.

The operatives of the Economic and Financial Crimes Commission (EFCC) arrested some persons alleged to have engaged in vote-buying in the governorship election.

The EFCC operatives, who were part of security operatives deployed to monitor the election, arrested some vote buyers with wads of cash and books containing details of voters.

Oni made the allegation while speaking to newsmen shortly after casting his vote at Polling Unit 010, Ifaki-Ekiti, his hometown.

Elebute-Halle, who is the only female candidate in the election, alleged that the APC, PDP, and SDP were buying votes with N10,000, N5,000, and N3,000 respectively