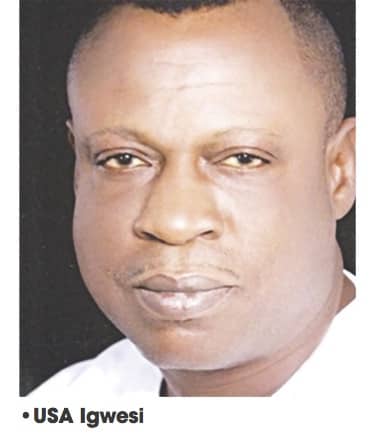 Igwesi: PDP as a political party runs in the blood and veins of any electorate in Enugu state

A Chieftain of the People’s Democratic Party  (PDP) and former Leader of Enugu State House of Assembly as well as one-time  member of the House of Representatives, PRINCE U. S. A IGWESI,  in this interview with JUDE OSSAI,  took a hard look at the politics of his home state, Enugu,  emergence of a technocrat,  Peter Mbah as party’s governorship candidate of PDP  in Enugu State, stressing  that if elected, Mbah would consolidate on Governor Ifeanyi Ugwuanyi’s achievements in the state.

You have been relatively lying low since your exit from the National Assembly.  May we know why it is so?

It is not true. I have been talking on local and national issues. I am still vibrant. That I have not contested for any elective post since I left the House of Representatives does not suggest that I am lying low.  I speak when the need arises.

What is your take on the emergence of Mr. Peter Mbah, a lawyer and an entrepreneur as Enugu State  PDP governorship candidate?

It gladdens my heart. I feel excited seeing the emergence of Mr. Peter Mbah, as the PDP gubernatorial candidate, Enugu State for the 2023 poll. I feel that another messiah has come to rescue and reposition  Enugu State. If Peter Mbah can replicate what he did and is still doing in the private sector with Pinnacle Oil and Gas in Enugu State as governor, Enugu will be on her way to El-dorado. Pinnacle Oil and Gas is a leading name and a major player in the downstream sector of the oil and gas sector with an expensive revenue base. Pinnacle oil and gas plays a leading role in the petroleum product trading, marketing and distribution in Africa.

They have continued to innovate and develop revolutionary concepts and technologies that have optimized operations in the sector. The above feats and achievements were driven by no other person than the man Peter Mbah, a maritime lawyer and seasoned technocrat.

Mbah’s experience in the private sector, vis a-vis some of his political interventions as former chief of staff and Commissioner for Finance in Enugu State will no doubt enhance his administration and management of the state. Enugu State will be lucky to have him.

The primaries across the country have come and gone with winners and losers. In Enugu State, despite the tension that preceded the exercise, it was eventually organised peacefully. What does that say of the administration of Governor Ugwuanyi?

If asked to advise the Enugu PDP gubernatorial candidate, Mr. Mbah, what would you suggest?

My advise for him is to consolidate on the achievements of Governor Ugwuanyi, and build on his legacies. He should as a matter of urgency resuscitate and rehabilitate the revenue base of the state by visibly blocking all loopholes, instilling transparency and ensuring that the Internally Generated Revenue (IGR)  is raised high up and sustained.

As a successful entrepreneur, we expect him to bring his glowing wealth of experience in the private sector to bear on governance by embarking on the rehabilitation and regeneration of ailing industries in the state, like NigerGas, NigerSteel, AVOP, and a host of them.

We expect him to embark on poverty alleviation programmes that will put food on the tables of people of Enugu State. We expect him to embark on massive construction and reconstruction of both urban and rural roads that will at the end, create wealth for the people of the state because farm products and produce can easily be evacuated to their relevant markets without many hitches.

Mbah with his international relations and contacts will definitely make Enugu State an investment destination. Enugu will be like Dubai, China, Singapore, etc. In no distant time, he will unveil his programme of action and everybody, including the press, will be astonished with what he has in mind for the state. He is a man of few words but action-packed.

He is not just an ordinary politician who will promise heaven on earth and will not do anything in the end. His social contract with the people of the state will be highly respected and will not be taken for granted.

Do you not think Mr. Mbah if elected come  2023 will be choked by the influence of the godfathers and indeed Ebeano political family?

It is a well-structured political family with Governor Ugwuanyi on the driving seat as the leader, Dr. Chimaroke Nnamani as the energizer and progenitor and entire members as co-founders and joiners. Mr Mbah believes in leadership but will not be choked by anyone.

Recently, the State chairman of the All Progressives Congress (APC) in Enugu State said that the Ebeano political system cannot be re-enacted or re-introduced in Enugu State under his watch. What is your reaction to his claims?

To start with, the said APC state chairman was a product of the Ebeano political family; he was selected among others to play a pivotal role during the period under review. He benefited immensely from the political largesse of the family when he served as DG of the then campaign organisation and as Commissioner for Works under the then administration of Dr Chimaroke Nnamani who is now a Senator representing Enugu-East senatorial zone.

The political structure that superintended or supervised over such a productive political era cannot be wished away or said to have dark days. In 1999, the government of Enugu State led by Ebeano political family constructed the following roads, and I can vividly attest to this because I led the Enugu State House of Assembly during the period under review: Opi-Nsukka road which has now received a facelift by Governor Ugwuanyi; Amechi-Obeagu road, Nza-New Haven road; dualization of Rangers Avenue; Ebeano Housing Estate; Golf Estate; Enugu State building, Abuja; New Judicial headquarters, Enugu; Nigerian Law School, Agbani; ESUT permanent site; Iyi water scheme; Ozaka-Agbani-Amaguze Road, etc. An era that is as endowed with such marvellous achievements cannot be said to be an era of dark days. We are now focusing on a new dawn of Peter Mbah and I will wish him well on his avowed determination to take Enugu State higher than he met it.

What makes you feel that PDP will win the 2023 election in Enugu State?

Enugu is a PDP State. PDP as a political party is running in the blood and veins of any electorate in the state. Since the inception of democracy, Enugu has been a PDP State and the choice of an unassuming character like Mr. Mbah who is a devout Christian will definitely accelerate the speed of victory to the Lion Building come 2023.

It is worthy of note to state that all the members of other political parties were all former members of PDP, so the supply chain and political warehouse of the state’s political engineering has been yearning to have a formidable and star-studded character like Peter Mbah.

What is your advice to the people of Enugu ahead of the next general elections?

: My advice to the people of Enugu State is for them to go and obtain their PVCs. It is now clear that the Independent National Electoral Commission  (INEC) has improved tremendously and ready to conduct fair and credible elections in the country.  So, the people of Enugu State should shine their eyes and vote for the person, who has all it takes to navigate leadership for them; to embrace a man who has conquered the private sector with his ingenuity and managerial acumen to be able to replicate same in the governance of the state.