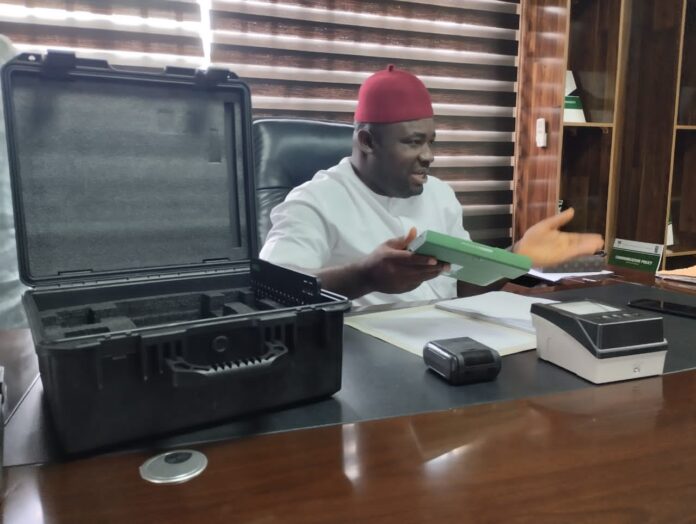 Dr Chukwuemeka Chukwu, INEC’s Resident Electoral Commissioner (REC), Ebonyi disclosed this at a press conference in his office on Friday in Abakaliki.

The REC who was visibly elated at the upsurge of prospective registrants said that the decision by the commission to inject five more registration machines into the existing 46 already in use was to ensure that those coming out to register were registered.

He noted that the commission had embarked on mass sensitisation of residents of Ebonyi through the electronic media and town hall meetings with key stakeholders including traditional rulers.

“INEC in Ebonyi as of today has a total of 51 IVED machines due to the deployment of additional five machines; the introduction of these additional devices is due to an upsurge of prospective registrants and our desire to ensure that we capture all of them,” Chukwu said.

He announced that the commission owing to popular appeal by Nigerians from different walks of life has extended indefinitely the registration exercise earlier due to end on June 30.

” But, because of the number of eligible people coming out to register the commission has decided to extend the date for the 2021/2022 voter registration exercise indefinitely.

“We, therefore, call on Ebonyi electorate who are yet to register to avail themselves of the window to go and get registered,” the REC added.

He noted that the commission in a bid to scale up the registration exercise had also deployed two intervention mobile registration machines that would be moved around some institutions in the state to register people, based on the peculiarity of their jobs.

According to him, Ebonyi has 2948 polling units with 48 registration centres spread across the 13 local government areas of the state.

He noted that some LGAs got five machines while some got four and three machines including the two intervention mobile registration machines.

Chukwu, who gave an update on the statistics of the permanent voter cards (PVC) in the state noted that old PVCs in the custody of the commission as of June 30 were 131,728 while 242 were claimed by their owners.

“In Ebonyi a total number of 19294 registered out of which 18 persons have collected their voter cards.

“Another category of PVCs which are 7452 belong to those who updated, those who did transfer among others and their PVC have been distributed to various INEC local government offices in the state,” he said.

The REC who expressed optimism that the owners of the unclaimed PVCs would collect them before the election, however, appealed to relevant stakeholders to assist the commission in sensitising the people on the need to collect their voter cards.

Chukwu further hinted that the commission has activated the portal for the uploading of particulars of governorship and House of Assembly candidates of political parties participating in the 2023 general elections.

“The portal will be open between July 1 and July 15 and once we close the portal on Friday, July 15, there will not be any room to reopen it,” he stated.