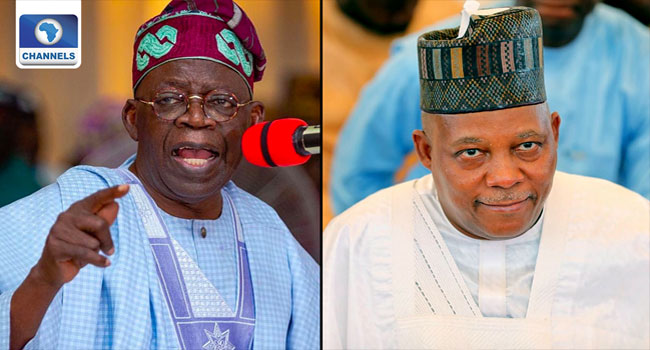 The long awaited vice presidential candidate of the ruling All Progressive Congress (APC) for the 2023 general elections emerged today in the person of Senator Kashim Shettima, former governor of Borno state.

Senator Shettima, a Muslim faithful, was unveiled today by the APC presidential candidate Bola Ahmed Tinubu, another Muslim faithful, in Daura, the hometown of President Muhammadu Buhari, in Katsina state.

Tinubu, a former governor of Lagos State briefed reporters about the choice at the end of a close-door meeting that lasted about an hour with Buhari at the President’s residence.

According to the APC stalwart, Shettima was selected because the former Borno State governor is “competent, capable, reliable and able to be picked as a running mate”.

The APC presidential candidate was accompanied to Daura by Governor Aminu Masari, shortly after his aircraft landed at the Umaru Musa Yar’Adua Airport in Katsina State.

Reacting to the development, the Minister of State for Labour and Employment, Festus Keyamo (SAN), described Senator Kashim Shetima as a worthy choice of a running mate to Chief Bola Ahmed Tinubu.

Mr Keyamo was of the opinion that Tinubu had made a great choice.

The minister who aired his view on Twitter, described Shettima as a “Quintessential banker and economist, suave gentleman and politician,” who is intellectually fertile and economically sound.

“Kashim Shettima is the perfect choice as VP,” Keyamo declared.

In a chain of reactions to the announcement of Shettima as VP to Tinubu, Mr Ibrahim Masari, who initially was picked as vice presidential candidate of the ruling All Progressives Congress (APC), has resigned.

In a communique on Sunday, Masari, a former National Welfare Secretary of the APC, stated that after much reflection and wider consultations, he is now going to step down.

“I realized that my decision will enable Asiwaju have more latitude to give more accommodation and inclusion that will position our party to win the coming elections, with the support of the people of Nigeria.

“In stepping down, I believe I can still serve our party and the country in several other capacities.

“I wish to confirm that I have submitted my withdrawal letter and affidavit to that effect as the Vice Presidential Candidate to Asiwaju Bola Ahmed TInubu in the coming elections,” Masari disclosed.

The APC chieftain thanked Asiwaju Tinubu for the trust vested in him, and promise that he and his family will remain steadfast in their support for the APC presidential flag bearer and the party