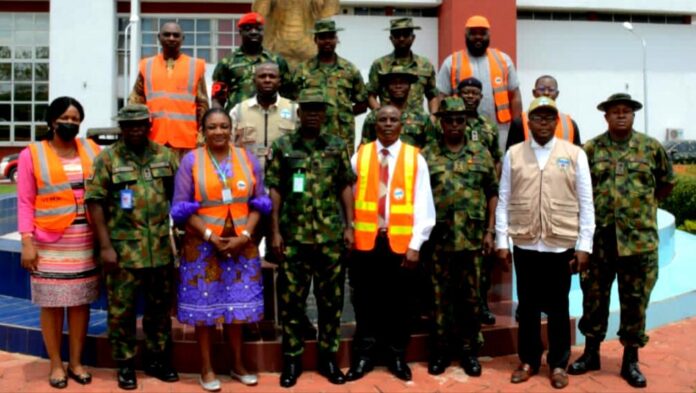 The National Emergency Management Agency (NEMA). has partnered the 82 Division of the Nigerian Army on emergency and disaster response and management issues within the South-East.

The acting Zonal Coordinator of NEMA, Mr Thickman Tanimu, said this when he paid a courtesy visit to Maj.-Gen. Taoreed Lagbaja, the General Officer Commanding (GOC), 82 Division of the Nigerian Army in Enugu on Wednesday.

According to Tanimu, the important visit was directed by the Director-General of NEMA, Mr Mustapha Habib-Ahmed and the D-G is desirous of the Agency keeping the age-long relationship with the Army strengthened for benefit of Nigerians involved in emergency situations.

He noted that the visit, which also serves as his familiarisation visit to the Division, was meant to reawaken the long time relationship between the Nigerian Army and NEMA in the zone.

He requested for a focal officer from the Division, whom the Agency could relate with in real-time on any emergency response or disaster management situation in the zone.

The NEMA coordinator also requested for an update on NEMA’s excavator kept in the care of the Nigerian Army as well as request for access to water during emergencies as well.

“This important visit directed by our NEMA D-G is to reawaken age-long synergy in emergency coordination and collaboration with the Nigerian Army especially the 82 Division of the Nigerian Army, Enugu.

“NEMA is here to also strengthen military Disasters Response Units (DRUs) in the South-East Zone as well as security and intelligence gathering and sharing on emergency and disaster issues in the zone,” he said.

Response, the GOC thanked the NEMA director general, zonal coordinator and his team for taking out time to visit.

He said the army was always eager and ready to work with NEMA during disaster and emergency situations.

“I am assigning Brig.-Gen. Olugbemi Obasanjo to act as a focal person to NEMA in the zone.

“Obasanjo will also help NEMA with DRU equipment if required and for the security of the warehouse,” he said.

“I have also approved that NEMA water tanker should be allowed express access to water from the barracks so long as there is water in the reservoir,” he added.