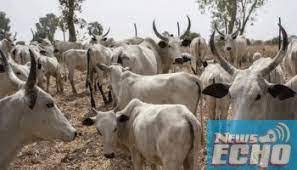 There was palpable tension amongst residents and travelers alike, on Saturday, July 23rd, 2022, at Lokpanta Cattle Market in Umunneochi Local Government Area of Abia State.

The cattle market, which has existed for several years, has grown into a sprawling mass which straddles both lanes of the four -lane highway.

It has since witnessed an upsurge in population, as well as an increase in violent crimes.

This reporter had passed the same location earlier on that same day from Enugu, en route Nnono Oboro, Ikwuano LGA of Abia State.

We were in a bus on the way back to Enugu , and had gotten to Leru, near to Lokpanta, when some people standing by the road side waved at us frantically, shouting ‘ No road! No road!’.

Our driver screeched to a halt. Several other vehicles followed suit.

Within a few minutes, more than a hundred vehicles had parked and covered both sides of the road.

Upon investigation, it was gathered from local sources that some enraged Hausa men had   used trailers and literally blocked the Enugu/Port Harcourt expressway, in such a way that no car could pass through on either lane.

It was further gathered that attempts by the police and some soldiers to get the protesters to unblock the road failed.

What was their grouse?

Well, it was said that a Fulani man and some cows were allegedly killed by unknown gunmen.

It was unclear, at press time, whether the major road artery has been reopened for general use.

Back to the present. What could the stranded travelers, including yours truly, do? We had to get back to Enugu, and it was getting late.

The option was to turn back towards Okigwe, take a left at Ihube junction, get to Uturu, a very bad stretch of road, take a left after two military checkpoints, and start heading west, on the Afikpo road, before making a left, again, at Ishiagu junction, in Ebonyi State.

The detour is a distance of approximately seventy kilometres!

And, you know what? Virtually all the stranded travelers had to take this route to get to Enugu.

A notable feature observed was the proliferation of army checkpoints on the expressway.

Then comes another just before the Lokpanta Cattle Market, and one before Ihube junction.

From there, there are two checkpoints before Uturu, and two again after Uturu, near the sprawling and palatial mansion of a renowned politician, Uche Ogah.

After that, there are several other checkpoints, all the way back to Enugu.

Ironically, almost all the areas that these soldiers are posted to are peaceful